Did You Mail Your Cards Yet? a History of the Christmas Card

Have you mailed your Christmas cards?  Did you receive any at Thanksgiving, astonished at the organizational efficiency of your friends, reconciled to the fact that for better or worse the season is upon you?

My annual card regimen boils down to a paste and edit on Shutterfly, an online order, printing labels, sticking labels and stamps, stuffing, sealing, and sending.  I don’t know many people, but we send some 150 cards.

It’s sterile. It’s a chore. Shouldn’t it be more?

Did you get a card from people you don’t recognize or recall having ever met?   I placed one such card on the counter, hoping for an explanation.  It’s produced with quality card stock of lovely people in gorgeous attire and smiling faces of I-DON’T-KNOW-WHOM.

Did you include the word Christmas or Holidays in your greeting?  or Peace, Love, Joy? or will you be late and forced to choose New Year?  I’ve set aside politically correct greetings and used CHRISTMAS, because that’s why I’m sending these cards after all. I celebrate many holidays, but this one is about Christmas.

My family’s religious heritage is Christian, Buddhist, and Jewish.  My husband’s Jewish cousin told me that good friends of his are practicing Buddhists and call themselves Bu-Jews.  I’ve thought about it for some time and have taken to calling myself a Chris-Bu-Jew.  It has a sort of ring to it.  In the world of cultural diversity, everyone’s ok with everyone and everything else.  So why not accept Christmas? I was not baptized or christened, but my father was Catholic. He read the bible to us and I’ve an affinity for the Psalms.

Maybe this is helpful: the history of the Christmas Card.

In 1843, Sir Henry Cole realized he could not answer all of the holiday letters from his clients.  As a busy publisher, he decided to create a trifold card which would include a painting of a happy family celebrating around the table and two side panels “to depict themes that would stir compassion…  because he wanted the elite who receive his cards to remember that during the winter months there were poor who needed food and clothing and that helping these people should be in everyone’s Christmas thoughts and plans.”  (Stories Behind the Great Traditions of Christmas. Ace Collins, p. 55) 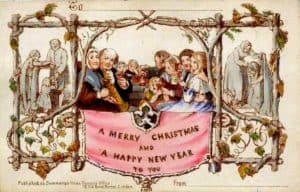 The first commercial Christmas card designed by John Horsley for Henry Cole, side panels depict giving food and clothing to the poor

Cole printed a 1000 cards and added the words, “A Merry Christmas and a Happy New Year to You.”  Despite controversy from the Puritans that the toast encouraged drinking, the cards were a success.  Within a decade, the commercial Christmas card became an industry and the practice traveled across the pond.  America’s Louis Prang, a German printer, expanded the tradition.  And in 1862, Thomas Nast, created the image of Santa Claus for a printing of Clement Clarke Moore’s poem, The Night Before Christmas. It became the iconic image of the jolly old elf. 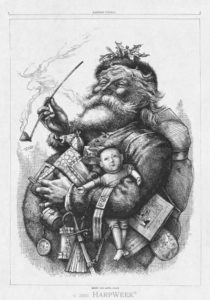 Sir Henry Cole, an “overworked English knight” never imagined that a grammar school exercise of drawing a “Christmas piece” for his parents combined with heavy paper would become a widespread Christmas tradition.

Today, we, all of us it seems, Christian, Jewish, Buddhist, Muslim, Hindu, Bu-Jew, and Chris-Bu-Jew alike, have taken to the tradition with verve.  Except, where once the painter John Horsley and the illustrator Thomas Nast sketched Christmas scenes, we’ve pasted in ourselves: portraits, photos, lifestyle pictures, and travel shots which are taken in the studio, on the beach, on the slopes, and on the seas.

Maybe we don’t see each other as often as yesteryear when people visited at the doorstep, in church, or in town. People like to see each other. I like receiving cards too and the photos show me how friends’ children have grown and what everyone’s doing.  I even receive a few handwritten notes.

So I’m with Sir Cole: send cards.  And, I’m with the modern masses: send photos.  I pasted a photo on the front and back of this year’s card.

And I added this greeting.

It’s worth noting that Christmas as a Christian celebration precedes Christmas  cards by only a few decades: roughly 200 years ago.  For many more centuries, the day was the highlight of the winter solstice and a pagan celebration welcoming the light and longer days; revelers noted the solstice with weeklong riots and drinking.  The churches often closed their doors on Christmas while rioters made merry and demanded food and drink.  Charles II restored Christmas revelry after Oliver Cromwell and the Puritans had largely squelched the festivities in favor of sober reflection.

Church leaders of all denominations were aghast at the return of the pagan Christmas celebrations……. [they] simply closed their doors and ignored Christmas altogether.  The police usually wrote off the often violent day as a tradition, so few lawbreakers were arrested.  For generations in many areas of London, Christmas was a day when women and children feared to venture into the streets. (Collins, p. 16)

To get ahead of the times, perhaps for next year’s Christmas Solstice I should send cards with this greeting:

We welcome the light! Happy Birthday Sol Invictus, God of the Sun!

May your days grow longer and warmer.

To learn more, read about the Stories Behind The Great Traditions of Christmas (link) by Ace Collins.