The Oracle of Delphi and the Divine in All of Us 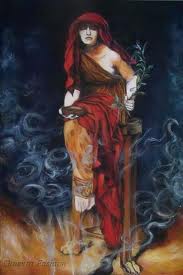 The Swedish author Par Lagerkvist won the Nobel Prize for Literature in 1951 and this story is worth your time;  it’s just 154 pages and readable in a day.   Some readers get upset because he combines Greek paganism and the bible in a fable, but the commonalities between the two characters and their beliefs make it compelling reading.  Their lives are determined by their interaction with the divine.

The first part tells the story of the wandering Jew Ahasuerus who would not let Jesus lean on his house while he was carrying the cross to his death.   Jesus told Ahasuerus that he would never die, but wander the world in all eternity.    Feeling cursed and losing everything of importance in his life, he sought out the oracle at Delphi who was unable to help him.  Desperate, he went to the old Sibyl.

The Sibyl was once the high priestess of the Temple of Apollo, the Pythia or divine voice of the Delphic Oracle.  Her story makes up the bulk of the book.  She served the temple by giving herself up to God.  This shocking ritual occurred beneath the temple above a dark crevice in the earth where she experienced rapture, drug induced ecstasy, and divine possession among snakes, a goat, and the male priests.  She understood and remembered little from these episodes and her life was bereft of tenderness and compassion; she was a vessel to be filled by god and a tool for the male priests of the temple who interpreted and decoded her fits.   So it was no surprise what joy and happiness she experienced with a human lover.

Their love was their downfall.  He died and she became pregnant.  Exiled from the temple and stoned, she fled into the mountains to give birth to her son among the goats which provided safety, sustenance, and company.   Her son was mute, likely an idiot.  The timing of his birth did not make sense and over the years she realized that he was not the son of her human love.  But who or what was he?  After telling Ahasuerus her story, they noticed that the son was gone and followed his tracks to the mountain top where they saw only his clothing and sandals.  The footsteps diminished towards the summit and it was clear that he departed their world.  Was he a Goat god, a divine birth from her communion with god in the temple?

In the last part of the fable, the wanderer begged for an answer to his curse and the Sibyl said that God was both good and evil, darkness and light, that this great mystery would remain a riddle, “To exist for us always. To trouble us always.”   She looked at his soul-less eyes and said:

“It’s plain you are not free, that you’re bound to him and that he doesn’t mean to let you go.  He is your destiny . . .  Perhaps one day he will bless you instead of cursing you.  I don’t know.  Perhaps one day you will let him lean his head against your house.”  (Sibyl, p.152)

Perhaps what Lagerkvist is saying, is there’s a divine in all of us:  that God is in the Pythia, the wandering Jew, and even the mute son.  His presence is rapturous and orgasmic as well as violent, tragic, and cursed.  That it is in these times when we are not ourselves, when we leave our every day existence that we are filled with God, or that HE is in us.  The Sibyl’s wisdom comes from her acceptance of this enigma, as the Pythia and as an old woman.

“He has made me very unhappy.  But he has also allowed me to know a happiness passing all understanding.” ( Sibyl, p. 150)