Late August meant vacation. If in town it meant more parking, easy shopping and less traffic. As a child, the family business tethered me to an insular life, volatile at times in its routine and intimacies. At middle-age with two children gone and one in the last year of high school, I’m not sure what summer means anymore. It’s different now because travel was a part of my family’s summer, or at least I made it so.

Summer was escape. To Alaska or Norway or Australia, far-away places seemed better, more appealing, a place so remote that we were out of reach, off the grid. If that wasn’t doable, there was the road trip to Bar Harbor, Montreal, Prince Edward Island. How different from my own childhood, stocking liquor on the shelves or folding clothes at the laundry, captive to the business. As a parent I have the means to get away and take the kids, and I changed the pattern I had known. But was it better?

Did my kids like going away? It seemed so on their faces, the excitement of packing and planning and seeing new places. In high school, they wanted home time to hang with friends, to play sports. And, the sports. No longer confined to the school gym or fields, sports became year-round, the gradual end to family hikes and bike rides, replaced by team and club practices, games and tournaments and showcases.

Meanwhile friends left for summer homes on Nantucket and the Cape, going back every year, the neighborly faces, a mutual retreat, a break from the tedium, the solace of the ritual. E.B. White writes of this in Once More to the Lake, so potent that when he takes his own son, it’s clear there’s no going back. The end is chilling. I tried something similar and my children have memories of the Adirondacks and fishing on Saranac lake. Then we stopped going when the owners stopped renting. No more lake. No more Adirondacks. The tweens opted for sports camps, soon the oldest was gone, then the next, and the youngest was alone.

My parents came from different ends of the globe and it was hard to put down roots. My husband and I connected because we liked travel. And, I’ve been in one place for what seems too long, close to 13 years. My town is full of NYC commuters, society mavens, executives, celebrities and homesteaders, the ones who grew up and came back. There’s the widow down the lane, former French professor and Proust fan. There’s the widow up the lane, a military wife from Japan. She’s demolishing the house, a wreckage of wood and shingles and insulation. Her husband died last winter. I didn’t know them but it seems she’s shedding the shackles of a life, the walls of their years, as lover, as nurse. Maybe she sees a freedom just this far away.

Summer is the sanctuary one makes for herself. The books, the places, the activities you choose or those chosen for you. My father became a hermit in his dotage, retiring to his routine, to his house, to his chair. When I lived in Germany and asked him to visit, he said he’d done that already. He had worked in Vietnam and met my mother. They had traveled. Maybe, the collapse of Saigon killed his sense of adventure. He was happy to sit in the same place each night, to read his papers to watch the news and late-night shows. My mother filled the hours with work. She had a day job, a second job and then came home to cook. When she wasn’t working she was shopping. One fed the other. Make money, spend money. Her great loves were cooking and gardening. As a retiree, escape for her is a room filled with flowers, orchids lining the walls in potted stands, like ranks of soldiers, the VIPs seated artfully on the altar where she burns incense and chants prayers. Travel is no longer in the equation and leaving home for a few hours makes her nervous.

The tropical storm hit and she stayed with me, reluctant and nervous for home and flowers. She woke in the night and insisted she leave in the deluge of rain the next day. She feels her trove is so precious, so valuable that others would take it.

A large painting hangs upstairs, a girl by the seashore, squatting with a shell in hand. On the adjacent wall are framed pictures of my children kissing a dolphin, the kitsch photos the theme park sold us. Norah’s curls, the side of Cara’s cheek, my son’s rounded belly. Guests stay here when they visit, which is often. I host because I have the space and I’m close. After the family reunion, I cleaned the room to find body parts, limbs and head arranged on the floor. The Madam Alexander doll’s yellow dress still on the torso, and the elastic band which held the head, severed. It was carefully taken apart, like an intern’s first surgery. Likely my husband’s nephew, he stayed there during the reunion and offered no apology. No warning, just remnants of the doll. An image of naked barbies under the sink crept into my mind. My girls had known dolls and my nephews had not. It was plain old curiosity. Just what holds it together, what is inside?

My children’s college friends who stayed there told me about the eyes. The dolls’ eerie eyes. They hadn’t mentioned it during the years they had visited, but it slipped out after graduation. They had turned the dolls to face the wall. I had to go and check on these eerie eyes. American Girl dolls, two of them. The eyes would close when reclined. I put one in a trunk and gave one to a friend. I found three Madame Alexander dolls, maybe ten inches tall and Anne of Green Gables doll on her stand. I tucked Anne away, faced the dolls towards the wall.

I imagined that dolls are a comfort and compliant playmate to generations of girls who love them. But, dolls feature in horror films and stories. The inanimate becoming animate, the host for the ghost. Chucky and Robert the Doll. These are the shells of something, of the idea of someone else in charge, dressing them and posing them, telling stories. It’s not much different than playing house, or making a home. Or planning summer, one’s escape from the tedium.

The 22nd of September marks the beginning of fall and summer’s end, the start of school, cool mornings, Army football games with the smell of sausage smoke from the tailgate. My third child is the only teen in the family, on the verge of adulting. She had her last first day of high school. Try that again, if you’re new to it: the last first day. It’s a thing, with social media posts of kids in their new duds; for my daughter that means a navy uniform skirt and Psycho Bunny polo, a pair of Air Force one sneakers, long hair slipped together with an elastic. 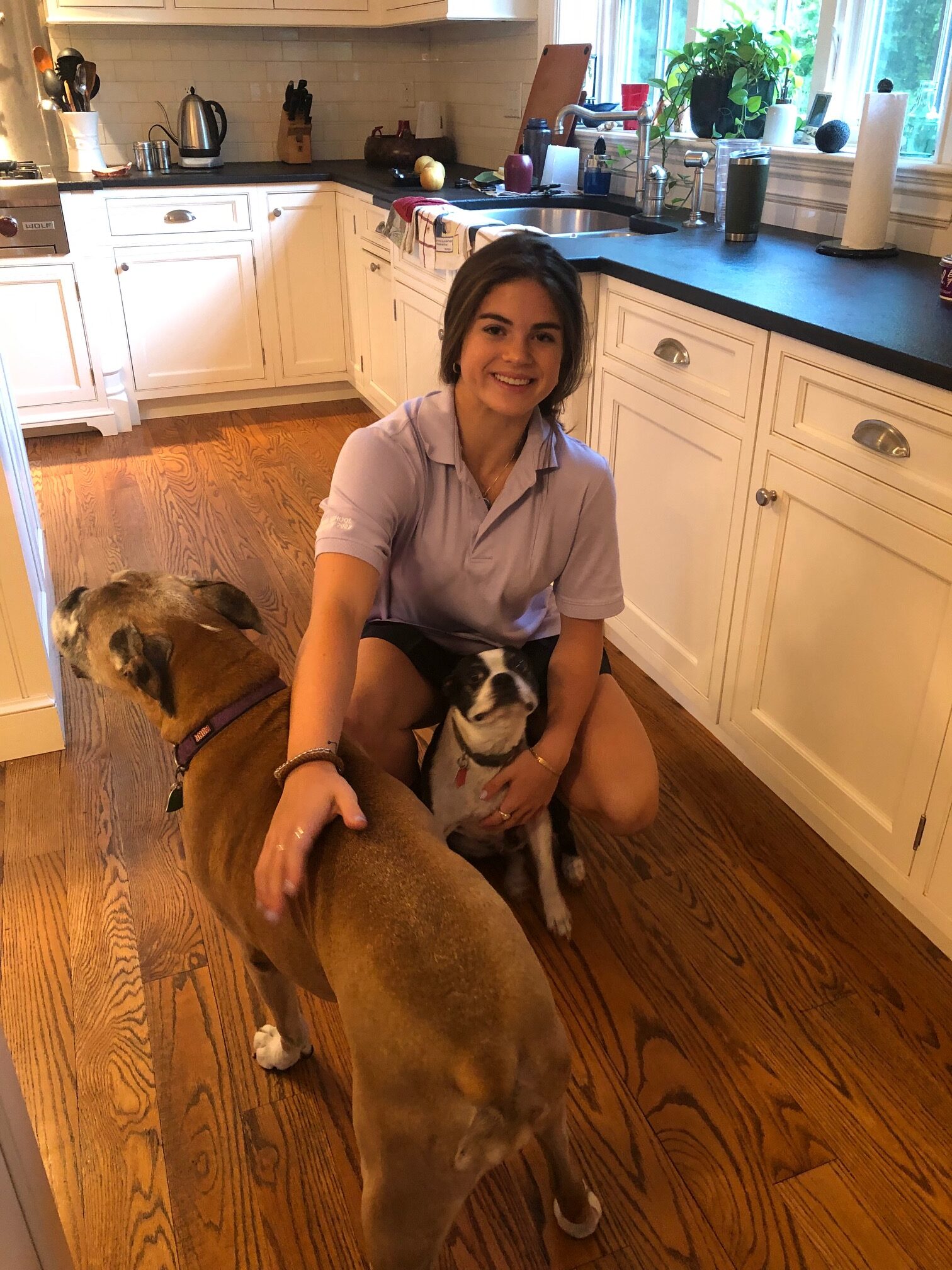 She came with me during my thirty-year college reunion this past weekend, to spend an overnight at West Point, my alma mater. My son who is a cadet there came by with her during my classmate’s retirement ceremony. Hundreds of us officers and veterans had more fun on the side-line reviewing the cadets on line in parade, rifles on their shoulder, eyes locked ahead.

An Indian summer, the midday sun was baking into my arms in the football stadium. At the end of the first quarter,  I head up to concessions and the shade, running cool water onto my hands and wrists in the bathroom. Army rolled over U-Conn by 31 points and the season was in full gear with three wins and zero losses.

Summer in Alaska with the family and my oldest child’s graduation seem a world away. Classmates at the reunion debated the merits of life’s next stage, maybe Florida or Colorado, Tennessee, life as empty-nesters. The Army with its assignments and deployments was for most of us, another era. Nineteen moves, one classmate said about his career, who was still assigned on active duty as a medical doctor. His continued role on active duty is in the minority since most classmates had to leave the military at 30 years if they hadn’t made general officer.

Just how is a life put together, the internal bands and parts, the machinery on the inside that holds the doll together? Seems for once, I get to fashion it in a way that I want. Summer for work and writing. Or, summer for fun and family. At my reunion , I watch football with my son and his friends, from an emotional and temporal distance, he as a cadet in his fatigues and I as a grad in my Civies.

I’m not sure what summer means anymore. But, it’s fall now and I have to get ready to host my senior’s high school volleyball dinner and prep for the next Army football tailgate. 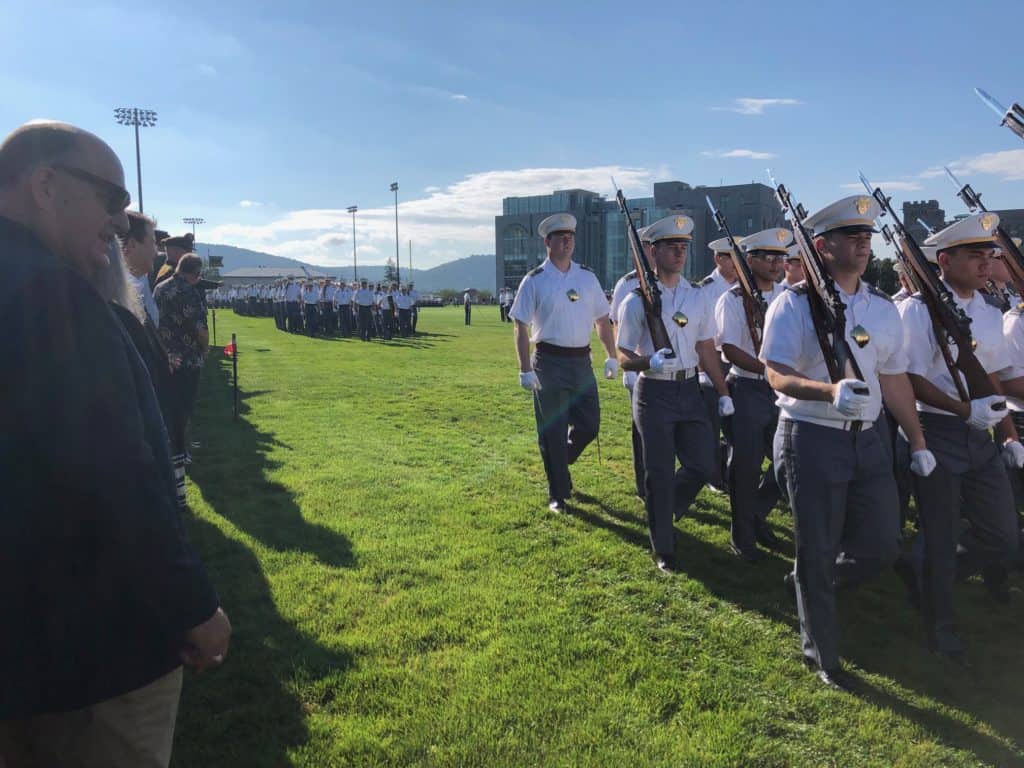 Old Graduates (officers and veterans) at their reunion, reviewing cadets on the Plain at West Point