What is the average amount of time a student spends on task without interruption?

What are the three root causes of interruption?

How do students achieve excellence given these digital age realities?

To answer the first, a Ted-Ed survey of 260 students said the average time on task without interruption is six, yes SIX, minutes. Three root causes of distractions are,  . . . can you guess? Laptops, smart phones, and Facebook. And lastly, just how do they pursue excellence in this day and age? The answer to this has a lot to do with Effective Practice, and eliminating distractions. [Video below]

Nothing terribly sexy. Talent is often over-rated because biographers will share many things with you about the greats, that it is not just talent. The greats put in the time.

I attended two concerts last week, a piano recital and a school concert. Eighteen pianists performed for an hour and the school concert lasted two hours. It included beginning, concert, and jazz bands as well as solo performances on guitar and piano. The school conductor is a jazz musician who played with several ensembles, encouraging students to improvise solo from the earliest age through seniors.

The piano program focuses on “the pursuit of excellence in performance”, a musical vision of the school’s founder and a guiding philosophy. Two of my children performed on the piano for the recital and my son also performed in the school band.

The pianists memorize their pieces from an early age; rather than reading the music, this lets them focus on musicality, rhythm, accuracy, and technique. They meet for workshops to fine-tune songs and practice in front of peers. The director critiques each child’s performance from notes and dynamics to phrasing, interpretation and how to bow to the audience at the finish. It is not enough to know the notes, because notes alone do not make music.

This was my senior’s last piano recital. It began with younger students performing and progressed in difficulty, “seedling, budding, and blossoming pianists.”

The pursuit of excellence is under-rated. So it is refreshing to experience a program with this vision. The simplest song such as Bell Chimes or Old MacDonald can be played well. Pianists have practiced and performed these last nine years we’ve been involved and they play from memory, attempting mastery of their selections.

Meaningful feedback and instruction coupled with EFFECTIVE practice help students pursue excellence. We know so much more about the brain today, the firing of neural synapses, the building of myelin sheath, and particularly the role of music in brain development. Studies of pianists, playing complex pianistic works, show the brain lighting up all over.

A key part of excellence involves quality repetition and quality only happens when the student understands what she is doing right or wrong. Here’s where the instructor is essential to improvement and ultimately to performance success.

The piano director often shares stories about concerts and professional musicians, that rarely is a performance ever perfect. But she has students aim for it and get close in trying. My son played the same song as another student, but the director explained that a piece is never played the same way twice. Each musician interprets it in his own way and we heard just that: my son played a more exuberant and intense jazz piano piece than the soulful version performed earlier.

My senior chose to play the Toccata in E Flat Minor by Aram Khachaturian. It is far from perfect but she has worked on it for a long time with help and guidance from her teacher.

The Toccata utilises some Armenian folk melodies and rhythms, as well as baroque and contemporary 20th Century techniques.[2] It begins Allegro marcatissimo. A central section Andante espressivo leads to a reprise of the opening motifs.[1] The coda is based on the central section’s theme.[2] It lasts around 5 minutes. (Wiki)

The director introduced my daughter as the last performer and talked about the Toccata, and that after years of study, this final selection was also her “Swan Song.”

Music is for a Lifetime

I tell my children this about music. You may move and you may go to different schools, and life will take you many places; you will work at different jobs and meet different people, and even those closest to you will come and go. BUT, you will always have your music.

May is recital month and students perform for families and friends, fathers and mothers.  It’s also a beautiful gift for Mother’s Day.  So to my children, thank you for the music and the pursuit of excellence. 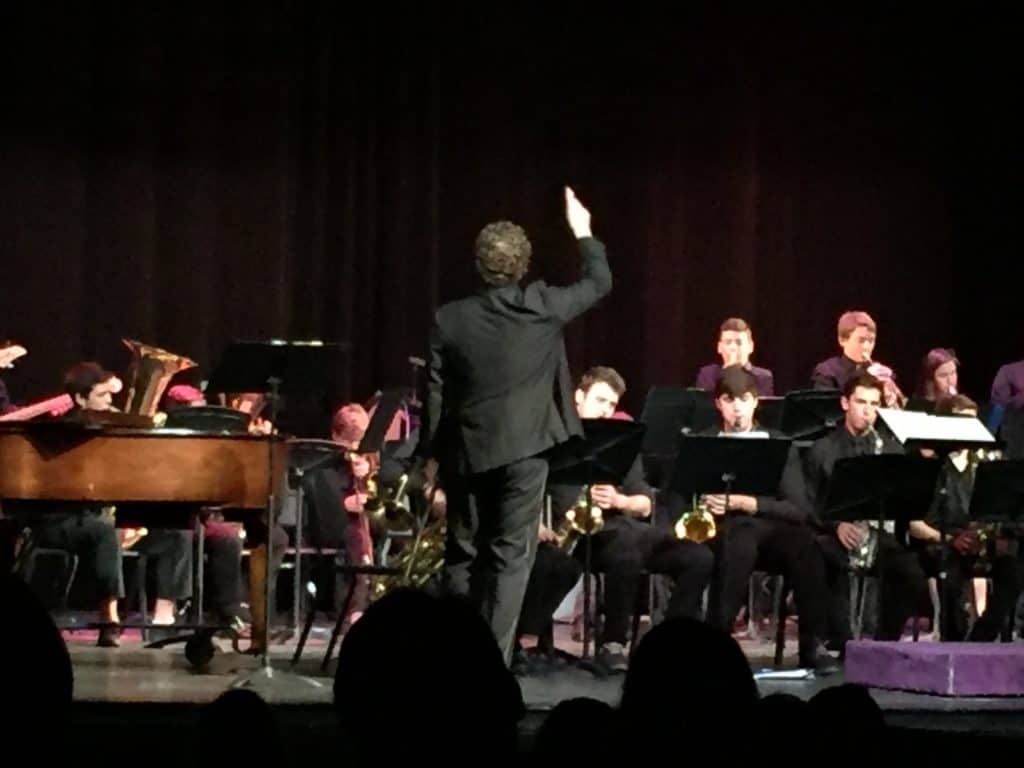 My son’s jazz concert, standing just to right of conductor