When Business Becomes History – Why Industry is Leaving Connecticut

“Abe Lincoln may have freed all men, but Sam Colt made them equal.”

It’s an interesting idea to ponder. President Lincoln is praised universally today, across the aisle, and around the world, but what of Samuel Colt? Who is Samuel Colt?

The last couple of years, I’ve driven through Connecticut for my daughter’s volleyball games and last weekend’s visit to Springfield, Mass has me thinking about this old town, the center of firearms manufacture from the 1770s until the 1960s.

The region reminds me of New York’s former boomtowns like Kingston and Binghamton, and Connecticut’s Waterbury and Hartford. These once vibrant communities and buildings were gutted by the twin blades of time and politicians, their facades decaying and cadaverous, lining streets and throughways like architectural tombstones. Where is everyone?

Kingston and Binghamton were home to IBM and Singer Link. Connecticut played a key role in the industrial age with factories and textiles, the pioneers of industry in the New World.  Waterbury was the hub of the brass industry and clockmaking.

The old IBM succumbs to the desktop computer.  The manufacture of guns, mortars, and weapons for the revolution, for the Union, for the country, based in Springfield Mass, capitulated to progress, and more recently to politics. Hartford’s where Samuel Colt set up his factory, invented the revolver, and built an empire.

The iconic blue dome off Interstate 91 in Hartford is not a church after all. It is the symbol of a bygone era: Samuel Colt built this dome atop his armory with a rearing horse on a gold sphere, known as the “Rampant Colt.” Colt’s firearms played pivotal roles throughout U.S. history. Colt’s Single Action Army Revolver became known as the “Gun that won the west,” its Browning Automatic Rifle was the standard for WWI and WWII, and the M16 was the service rifle into the 1990s. It’s the same weapon I qualified on as a cadet and officer. 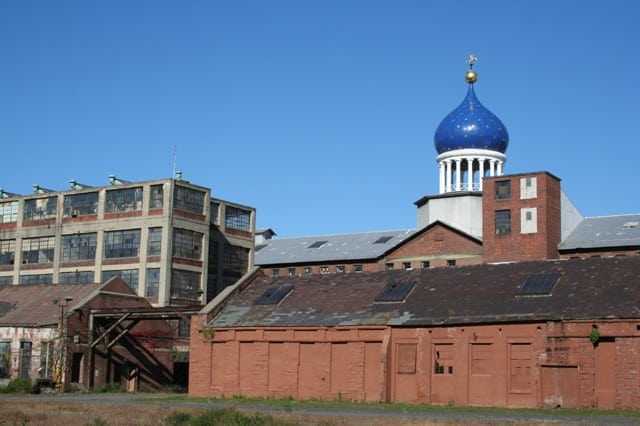 Colt Armory, the historic factory complex on the 260 acre site in Hartford along the Connecticut River, rebuilt in 1867 after a fire

Today it’s a conversation stopper just to mention Colt or Smith & Wesson or Remington. Colt moved to West Hartford some years ago and filed for bankruptcy in 2015, and Remington moved  two production lines from New York  to southern states in 2014 because of gun laws.

The Springfield Armory is now a historic site.  The Colt Armory is also a historic site. These  are signposts of popular economic policy:  vacant buildings and dying businesses. The firearms industry and warfare have changed, but an unfavorable business climate has become de rigueur.

This year General Electric decided to leave Connecticut.  Surprised? No psychics or clairvoyance needed, visit this part of Connecticut or upstate New York and see for yourself.

Forbes writer Jim Powell explained “How Rich Connecticut Morphed into one of America’s Worst Performing Economies” in a dismal and factual article about the state’s decline.

Iowa ranks as the top spot for Hartford Insurance and New  York Life. There’s irony.  The northeast is losing its footing in the insurance business, the gun business, or any business for that matter. Consider GE’s move.

Boston seems a surprising choice for new headquarters. Yet despite their reputation for taxing (so bad it’s been dubbed “Taxachusetts”) the Tax Foundation think tank ranked the state in the middle at 25th, whereas Connecticut comes in 44th. When Connecticut officials announced a significant change in their business tax policies last June, General Electric leaders decided to consider moving  its headquarters to a new state.

The company is valued at $290 billion. With annual revenue near $130 billion, GE ranks as 8th on the Fortune 500. It will be the largest company in Massachusetts by far. This is no small loss to Connecticut.

Just over a year ago, U.S. Senator Blumenthal visited the Colt Armory when it won approval as a national park, a pet project tagged on to the national defense bill. The Congressional Budget Office estimated the park would COST $9 million over five years. Here’s what Sen. Blumenthal had to say.

“This monumental milestone will drive economic growth and new jobs all around Connecticut by making Coltsville a magnificent, magnetic destination and history hub.” (Link to article)

Do you think government officials will designate the soon to be vacant GE Fairfield campus a historic site? And by doing so, drive economic growth and create new jobs?

The government doesn’t create wealth; it can only take it from the productive people and risk takers who do.

* People are leaving Connecticut by the tens of thousands. Population drops in spite of international migration. “But for every three Connecticut residents lost to other states, two were gained from other countries.” (Population Drops Again, Hartford Courant Link)

*** Here are Connecticut taxes cited in Jim Powell’s two year old article in Forbes.  It does not reflect the tax changes which spurred the GE move.  (Link to article, particularly informative for CT residents)

Meanwhile, Connecticut income taxes continue to go up, and Connecticut taxes generally are multiplying. According to the Yankee Institute, 2011 was a banner year when Democrats – who now control both the governor’s mansion and the legislature – pushed through 77 tax hikes. For instance:

The personal income tax rate went up for individuals making as little as $50,000

The highest marginal income tax rate went up from 6.5 percent to 6.7 percent.

The corporate tax rate went from 8.25 percent to 9 percent. Higher taxes were retroactive to January 1, 2011.

Estate taxes started kicking in at $2 million instead of $3.5 million.

There’s a new tax of .25 of one cent per kilowatt hour of electricity from the most reliable sources (like nuclear power, natural gas and coal) – not applicable to subsidized solar or wind power.

The Amazon.com tax – sellers without a physical presence in Connecticut must collect sales taxes on orders originating in Connecticut.

Nursing home resident user fee – up from 5.5 percent to 6 percent.