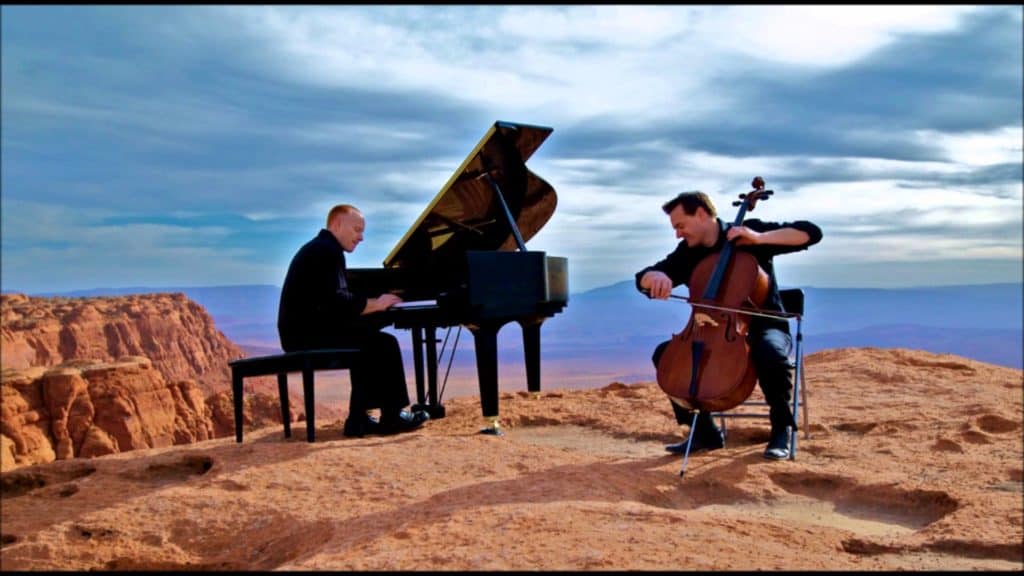 On the Edge at Bryce Canyon National Park, Utah

Four dads from Utah performed an uplifting, classical/modern, soul wrenching performance at Tanglewood Friday evening. I laughed at corny jokes and cried to the sweetest notes I’ve heard this year.

My tween introduced me to the Piano Guys. They made videos which have gone viral: Cello Wars with dueling cellists as Jedi Master and Sith Lord and an appearance from Darth Vader, a duet on the Great Wall of China and another on the edge of Bryce Canyon. Thanks to creativity and YouTube, classical is becoming cool.

A tween, two teens, no screens. I’m serious. My family was engaged from start to end.

The musicians are Jon Schmidt on piano and Steven Sharp Nelson on cello. I asked my 14 year old son, “What comes to mind when you think of the Piano Guys?”

He said, “Cello Wars, ADHD, and a fan’s comment, ‘Thumbs up for the guy who doesn’t even know what instrument he’s playing.’” The audience roared over that. Why are they the Piano Guys then?  Nelson the cellist explained that they got their start making videos for the owner of a store called Piano Guys. They didn’t sell many pianos but their videos got lots of hits.

The name stuck. The owner Paul Anderson is now the group’s producer. The fourth guy is Al van der Beek and he’s a songwriter and singer, and maybe Nelson is happy there’s another musician who doesn’t play piano.

As for ADHD, Nelson thanked his parents in the second set for their patience. He laughed at his early trials, saying he would start to practice and then stop, jerking his head, yelling “Squirrel!” from distraction. They put up with a lot, but they believed in him. He introduced his trio of cellos on the stage as Ma Cello, the Italian classic; Carmen Fee-Bray, the carbon fiber model; and Bruce Lee, the sleek black electric made in China. His ADHD was more than apparent in his use of each instrument, from dramatic pizzicato or plucking, to drumming on the case, to recording over himself with digital playback features.

My daughter said they were, “Coolio and Terminator Snowy River was really wow.” It’s a bit Jerry Lee Lewis times two, a duo on steroids with popular-classic combinations as insane and crazy as the music from Terminator and the love song Jessica’s Theme from the Man From Snowy River.

Yet they’re serious musicians, but they don’t take themselves too seriously. And sometimes they’ve drawn inspiration from their children, like what to perform on the Great Wall of China. Kung Fu Panda, of course. So they reworked a Chopin Prelude in with a soundtrack from the movie and created Kung Fu Piano: Cello Ascends. Don’t laugh. I sat in the Shed at Tanglewood and shut my eyes. I cried.

The performance was divine.

The piano guys thanked many people. They also thanked God. Athiest, agnostic, Buddhist, or Christian, the audience, all of us, clapped for this tribute. I don’t know if God has been there for these four men, but He was there Friday night. I heard His music live in western Mass.

Steve brought up his ADHD several times during the performance and I realized that it shouldn’t be a label, that I should be patient with my children, my son, that music doesn’t fit neatly into genres and neither do people, that a “curse” just may be a blessing in disguise.

They gave me more than the gift of music.

** Nelson named the sleek black cello Bruce Lee and the white one Chuck Norris. Here’s a link to his Cello Bios.