Our Croatian driver Nico said, “What three things does the U.S. President use from our country every day?”  I didn’t know when I first arrived in Split a few weeks ago, but I’ve returned with answers for curious readers.

Nico smiled in the rear view mirror.  “The White House, his tie, and a pencil.”

Like many Croats, Nico is blonde and fair eyed, though his muscular build and black clothes fit his earlier role as bartender/owner. The Slavic influence is strong and there’s a lot of height in that part of the Balkans; I could see the clan resemblance to tennis player Novak Djokovic of Serbia.

Locals claim that bricks used to construct 1600 Pennsylvania Avenue where the leader of the free world resides come from the island of Brac in Croatia. In truth, much of the stone came from Aquia Creek in Virginia, but author William Seale, who wrote a two volume summary on our capitol manor, says the claim is possibly true, though not to the extent Croatians believe.  The milky white limestone was likely used for renovations in 1902 and 1952.

“I know it was used in the building,“ said Seale, who spent 10 years researching the history of the White House, the oldest federal building in Washington. (Yugoslavs Claim Bit of White House, link)

Next is the tie. The origins of the necktie or the cravat (French for Croat) do come from Croatia and have boasted a long fashion history.

The modern necktie spread by Europe traces back to the time of the Thirty Years’ War (1618–1648) when Croatian mercenaries from the Croatian Military Frontier in French service, wearing their traditional small, knotted neckerchiefs, aroused the interest of the Parisians. Due to the slight difference between the Croatian word for Croats, Hrvati, and the French word, Croates, the garment gained the name “cravat” (“cravate” in French).[2] The boy-king Louis XIV began wearing a lace cravat about 1646, when he was seven, and set the fashion for French nobility. This new article of clothing started a fashion craze in Europe; both men and women wore pieces of fabric around their necks. (Wiki Link)

The boutique Croata opened in Zagreb in 1992 to take advantage of this rich fashion history and it offers luxury neckties from the “Homeland of the Cravat.”  The Split sales clerk said the Dalmation dog tie is popular, but my husband liked the ties with intricate braiding patterns of the region. They offered the cravat with gold (24 karat) embellishment if you’re so inclined and the Dubrovnik store highlights archeological remains alongside silk displays, not the sort of thing we’re used to on Fifth Avenue.

What Wiki does not share is the sweet beginnings of this tradition. “Young men and girls tied kerchiefs around their loved ones’ necks as a sign of fidelity.” (Croata) 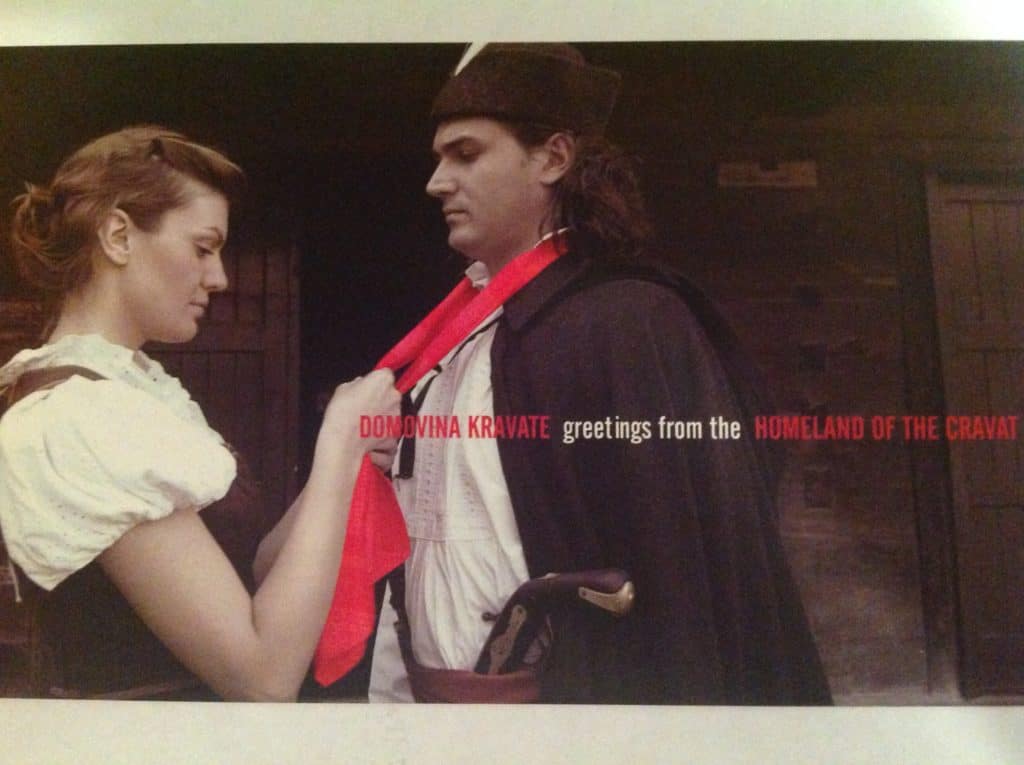 During the Thirty Years’ War (1618-1648), Croatian Light Cavalry reached all the way to Paris where the attractive Croatian style of wearing the neck scarf became popular among Parisians.

And that leaves the pencil which has Latin or Roman origins; peniculus is Latin for small tail.  The Croatian contribution to modern writing is not the cedar cased graphite I imagined, but the mechanical pencil and the fountain pen.

[Eduard Penkala] became renowned for further development of the mechanical pencil (1906)[3]—then called an “automatic pencil”—and the first solid-ink fountain pen (1907).[4] Collaborating with an entrepreneur by the name of Edmund Moster, he started the Penkala-Moster Company and built a pen-and-pencil factory that was one of the biggest in the world at the time. This company, now called TOZ Penkala, still exists today. ( Wiki link)

I’ve been back in the U.S. for a week and I’ve had time to reflect on my visit to the Dalmatian Coast from Split south to Dubrovnik and Montenegro. This story and many others provide insight into a volatile land and vibrant people.  Once part of the Roman Empire and not long ago part of the former Yugoslavia, Croatia is a country with a rich and storied past.

Diocletian’s Palace still stands from the fourth century amid medieval walls and modern architecture. And Stalinist era construction enshrouds the outskirts of this red tiled coastal town like an impending storm.

The Homeland War, as the Croats call it, ended in 1995 with Croatian independence.  Around that time, my U.S. military unit in Germany prepared to deploy to Bosnia for a peacekeeping mission.  I was ready to go, but as luck would have it, my replacement arrived to fill that role first.

I never imagined I would visit this war torn region to enjoy its beauty, history, and culture twenty years later.