I kept reading The Goldfinch for several reasons: it was my reading group’s selection, I had to facilitate the discussion, and it won the Pulitzer for Fiction.  This became the kind of book that I needed to set aside time to read, because it required effort.  I’m OK with effort, but I expect to gain something from it.

For the few uninitiated, The Goldfinch is a sprawling bildungsroman centered on 13-year-old Theo Decker, whose world is violently turned upside down when, on a trip to the Metropolitan Museum of Art, a terrorist bomb goes off, killing his mother, among other bystanders. At the behest of a dying old man, he makes off with a painting—the 1654 Carel Fabritius masterpiece, The Goldfinch. For the next 14 years and 700 pages, the painting becomes both his burden and the only connection to his lost mother, while he’s flung from New York to Las Vegas to Amsterdam, encountering an array of eccentric characters, from the hard-living but soulful Russian teenager Boris to the cultured and kindly furniture restorer Hobie, who becomes a stand-in father, to the mysterious, waif-like Pippa, plus assorted lowlifes, con men, Park Avenue recluses, and dissolute preppies. 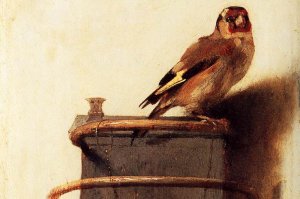 Theo is a likeable character, pitiable at first of course.  He’s 13 and he loses his mother.  Life sucks. In the western cannon, orphaned children are common and tragic circumstances the norm.  We expect him to suffer, and we even expect such suffering to last, but at some point we expect he will stand up, grow up, maybe even overcome it, who knows, rise from the ashes of the MET and his life.

So we root for Theo because we feel badly for him and we have hopes for him. He steals, he grieves, he lies, he deceives.  We get 771 pages of this and a foray with his less than loathsome father in, you guessed it, Las Vegas, a world populated with drugs, drink, and in the case of this book, drivel. If you want to wallow in the cesspool of life, look no further. Tartt commits the writer’s sin and stretches the Sin City chapters from what should have been 16 pages to 160 pages.

Save some trees, please.

The arc of a great story ends somewhere: the character changes, the conflict is resolved, something, some kind of change happens. So I kept reading.  I like Hobie and Boris and Andy, and as characters they are more compelling than our protagonist.

Here’s a list of critical decision points; these are moments in Theo’s life when he must make a conscious choice what to do.  I had to pare the list to spare you, but you get the idea.

– Theo steals the painting from the museum and lies about Welty’s ring to Ms. Barbour, age 13
– Theo indulges his grief: does drugs, drinks, steals, age 14-15  (160 pages in Vegas)
– Theo lies to Hobie who takes him in when he returns to NYC; Theo sells fakes as antiques; builds a business based on lies; Tartt titles the chapter, “The Shop-Behind-the-Shop”  age 15 +
– Theo agrees to marry his cheating fiancé Kitsey though he loves Pippa, age 23+
– Theo steals from Hobie, his friend and mentor, refashions Hobie’s lifelong work and shop into a sham business, then leaves him to deal with the fall-out.
– In Amsterdam, attempting to take back the painting he stole, Theo murders Martin in cold blood, firing shots into his arm and head. He hides in Amsterdam to wait out the murder.
– Boris returns for Theo at Christmas to celebrate!  Theo receives a cool two million Euro from Boris, his partner in crime, because Boris’s tip led to the art recovery of the century with five other famous pieces, each with its own reward.

Here’s the climax readers have been waiting for:  the stolen painting of the Goldfinch is recovered, but Theo had nothing to do with it. He was busy hiding.

And the thieves, Theo and Boris, get the reward.

Theo confesses all to Hobie who forgives him and says, “Can’t good come around sometimes through some strange back doors?” (Tartt 758).  Theo answers in the next and last chapter,”Sometimes you have to lose to win.” ( 759).

Then Theo  travels around for 11 months, hanging out in “airport lounges and hotels,” contemplating his life.  He writes to us, his “non-existent reader,” for ten more pages, sharing philosophical mumbo jumbo on life, on art, on love.

Theo’s in his late twenties.  He’s stolen a world famous painting and gotten away with it, hurt almost everyone in his life, murdered a man, and is left with millions, all so he may contemplate the meaning of art, truth, and illusion.

Here is an illusion:  this is art of the highest order.

Pulitzer Prize for Fiction 2014:  Awarded to “The Goldfinch,” by Donna Tartt (Little, Brown), a beautifully written coming-of-age novel with exquisitely drawn characters that follows a grieving boy’s entanglement with a small famous painting that has eluded destruction, a book that stimulates the mind and touches the heart. (2014 Pulitzer for Fiction Citation, link to site)

The Goldfinch is the study of a victim, a boy who lost his mother from a terrorist bombing and suffers long into adulthood.  Theo remains a victim who never rises above his circumstances, never overcomes adversity, and acknowledges he must “lose to win” and find good through “some strange back doors.”

After reading Don Quixote, this award winner reads like hackwork.  Cervantes said it well: ‘scholarship’ and writing “without virtue is like pearls in a dunghill.”