Revisiting a Classic –  The Great Gatsby by F. Scott Fitzgerald 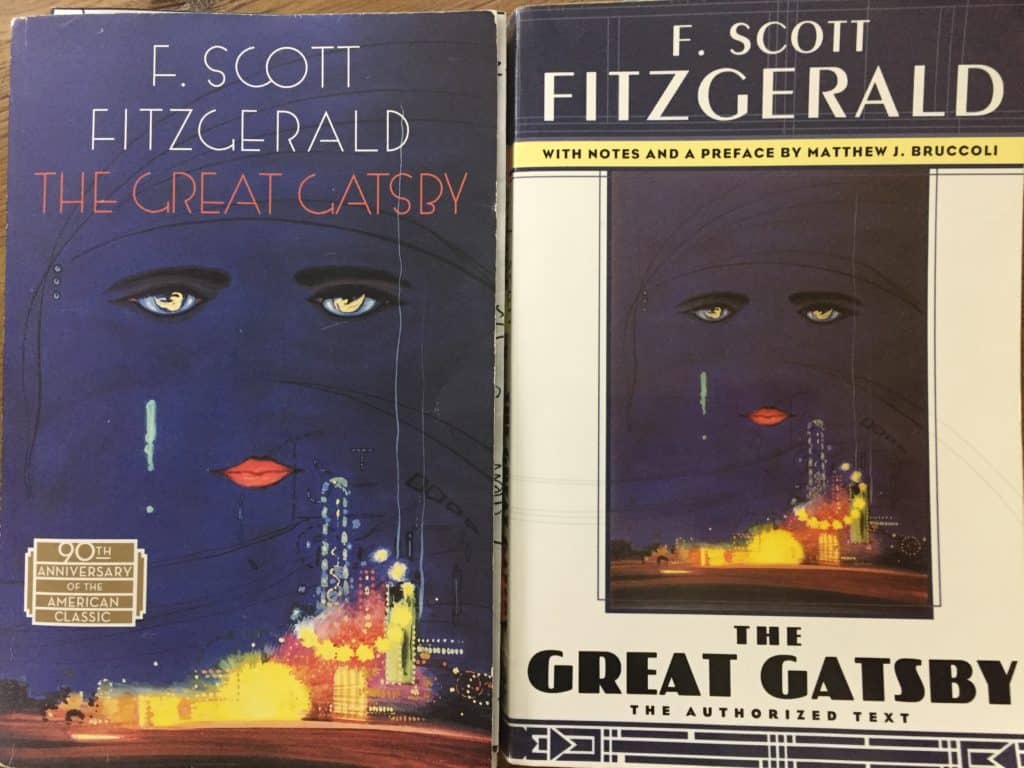 My daughter’s copy and my own

I’ve been reading a lot for grad school, a dozen plus books in a short time, some of which I’d read already, like this one. So yep, graduate school, ME and going back AGAIN  for another degree, in writing. It shouldn’t be as much work because I’m already doing this stuff. I’m a lifelong student or a student for life, happiest when I’m learning.  Gatsby is on my graduate reading list.

Here are my thoughts this time around.

It’s been about a decade since I read this classic. It sounds cliché but it is worth stating that you never read the same book twice; the words don’t change but you do, the reader. I’d forgotten so much: the narrator Nick and his cool steady voice, the ominous eyes on the billboard by the valley of ashes and West Egg and East Egg, never the twain shall meet.

THE TREATMENT OF TIME

How does time play into the narrative? Fitzgerald condenses time into key scenes and interactions with Nick who even mentions that the recollection of a few events during that summer may seem to distort reality. He admits to the reader that he is actually in the city with much to do each day, learning the bond trade and otherwise engaged in a work-a-day world, something the East Eggers know little of.

I read my daughter’s copy of the novel which had her highlights and marginalia, bringing my attention to the teenage mind and the points of interest for a first time reader. I noticed the lyricism and writing, the setting, symbolism, foreshadow and well crafted storyline. In nine chapters, the reader learns a lot about lovers’ follies and the illusion Gatsby believes, that he can go back in time and retrieve Daisy’s love, that Tom Buchanan and their child and life together mean little. Gatsby is not beyond Nick’s scorn, indeed he says so in the first paragraphs, but what Nick learns over the course of the summer, is the East Eggers and all their snobbery are as rakish and careless, more selfish than even the corrupt and deceptive James Gatz “Gatsby”. They hide behind their money, their status and their rationalizing delusions.

Nick opens the novel with a recollection of his father’s advice on criticism and closes with Gatsby’s wonder at the green light on Daisy’s dock, the idea that he could reclaim a past and a love so easily, that like the beacon across the narrow bay it was just there, shining brightly and calling to him. And there’s an optimism to the illusion after all. 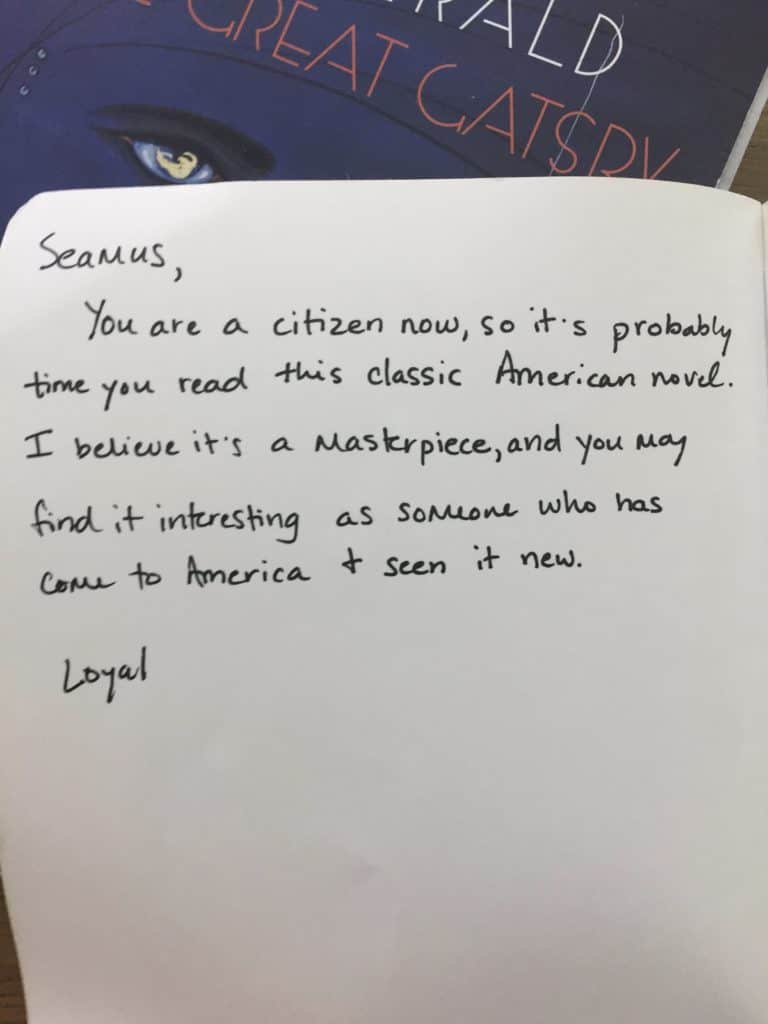 Love this inscription on my used copy. The perfect gift for a a new citizen, the American novel!

It’s not long and worth the read, or as the case may be, re-read.  You’ll get more out of it now as someone who’s lived a bit since your teen years.

Short take Writer's Toolbox Em-dash Book recs So says the lexicographer and usage genius Bryan Garner. My desk copy of the 4th edition of Garner's Modern English Usage states on page 750, "The em-dash is perhaps the most underused punctuation mark in American...

Books for Mothers and Daughters

Short Take, 2 min read Mother's Day Book recs, ages 9 to 99 AVAILABLE ON PODCAST CLICK HERE It's a gray day full of drizzle in Connecticut though it's not as cold as it has been. The yellow lilies in the porch planters are in full bloom and they remind me of my...

What Makes a Speech Great? An Admiral Tells 3 Stories

6 min read Writer’s Toolbox Public speaking AVAILABLE ON PODCAST HERE Admiral McRaven commemorates the 11th Anniversary of Operation Neptune's Spear What makes a speech great? There are a lot of good speeches and good speakers. But a great speech is one you remember....

Exercises in Style: a Writing Tribute

3 min read Book rec Writing Toolbox Wordplay Ages 9 to 99 AVAILABLE IN PODCAST HERE Titles begin with letters as human forms Narrative One day at about midday in the food line, behind the checkout of a more or less busy Costco, I observed a person with a very big...

1000 Push-ups? Getting Comfortable with Being Uncomfortable

6 min read Memoir rec Work-outs, push-ups and running AVAILABLE ON PODCAST CLICK HERE Get comfortable with being uncomfortable. That’s the short take on Living with a SEAL*, 31 Days Training With the Toughest Man on the Planet. Jesse Itzler, the author, is fit by most...

Bedside Counselor on Parenting in Anger, in Two Translations

6 min read Book rec Prose for emergencies Writing feature AVAILABLE IN PODCAST, CLICK HERE For solace and for counsel, I have several books I find myself returning to again and again, and to this one, most recently, as my third child prepares to leave home.* For...

What I Learned Walking With a Friend

8 min read True Story Military service Road walking, trail notes AVAILABLE IN PODCAST - CLICK HERE Not 30 miles as the crow flies, that’s how far I was from my childhood home. It was gray and threatening rain, the time in spring that’s cool, tree buds just coming in,...