The Last Salute – Surrender With Dignity – On Battles & Elections

Red carpet, stairs, and glitter welcomed us at the Riverside Yacht Club. Mark joined the mass of suits and the occasional uniform to register (sign in and provide credit card) for the gala, a fundraiser for the Children of Fallen Patriots. It was the weekend after Veterans Day and the event attracted the who’s who: deep-pocketed Greenwich society, politicians, and top military brass. We were guests.

I hung my jacket in the coat room and waited by the wall of the crowded lobby, checking out the officers and soldiers, their branch of service, rank, and awards. I noticed two framed displays: a picture titled The Last Salute, Appomattox Courthouse April 12, 1865 and a framed letter.

The image of confederate surrender surprised me; it was not something I expected to see at a boating club though it did seem to fit the occasion.  The letter explained the artist’s rendering of the little known events of the day which ended four years of America’s bloodiest conflict, the casualties amounting to 2% of the population at the time or 620,000 men. (Civil War Casualties, Civil War Trust).

The equivalent percentage of today’s population would be 6 million. 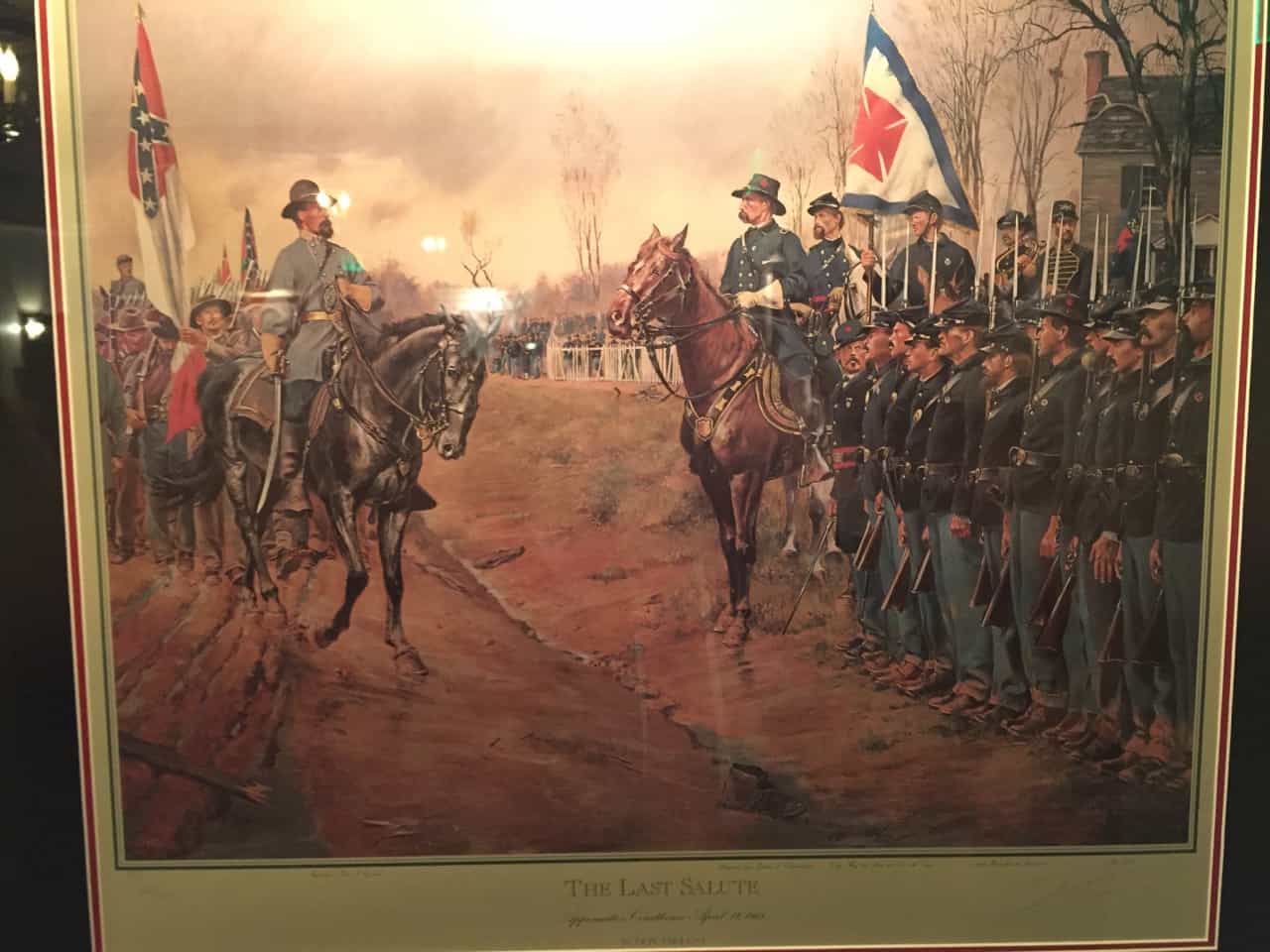 No photos exist of that fateful surrender in 1865 which changed the course of events of our fledgling country, but the artist Don Troiani recreated the scene. The mounted officer depicted on the right is Major General Joshua Chamberlain who was directed by Union General Grant to preside over an official Confederate surrender of arms and colors.

Chamberlain commanded the valiant 20th Maine Regiment to hold Little Round Top and turned the tide of the Civil War at the Battle of Gettysburg. Fortunately for us, he was also a Bowdoin professor who wrote 25 articles and the unit’s organizational history for the Gettysburg Commission.

What’s particularly relevant is the manner in which Chamberlain received General Gordon and his troops during their march.  Best in his own words, Chamberlain wrote about the surrender, but steel yourself, even 151 years later this is a stirring and difficult passage to read.

“At such a time and under such conditions I thought it eminently fitting to show some token of our feeling, and I therefore instructed my subordinate officers to come to the position of ‘salute’ in the manual of arms as each body of the Confederates passed before us.

“It was not a ‘present arms,’ however, not a ‘present,’ which then as now was the highest possible honor to be paid even to a president. It was the ‘carry arms,’ as it was then known, with musket held by the right hand and perpendicular to the shoulder. I may best describe it as a marching salute in review.

“When General Gordon came opposite me I had the bugle blown and the entire line came to ‘attention,’ preparatory to executing this movement of the manual successively and by regiments as Gordon’s columns should pass before our front, each in turn.

“The General was riding in advance of his troops, his chin drooped to his breast, downhearted and dejected in appearance almost beyond description. At the sound of that machine like snap of arms, however, General Gordon started, caught in a moment its significance, and instantly assumed the finest attitude of a soldier. He wheeled his horse facing me, touching him gently with the spur, so that the animal slightly reared, and as he wheeled, horse and rider made one motion, the horse’s head swung down with a graceful bow, and General Gordon dropped his swordpoint to his toe in salutation.

“By word of mouth General Gordon sent back orders to the rear that his own troops take the same position of the manual in the march past as did our line. That was done, and a truly imposing sight was the mutual salutation and farewell.

“At a distance of possibly twelve feet from our line, the Confederates halted and turned face towards us. Their lines were formed with the greatest care, with every officer in his appointed position, and thereupon began the formality of surrender.

“Bayonets were affixed to muskets, arms stacked, and cartridge boxes unslung and hung upon the stacks. Then, slowly and with a reluctance that was appealingly pathetic, the torn and tattered battleflags were either leaned against the stacks or laid upon the ground. The emotion of the conquered soldiery was really sad to witness. Some of the men who had carried and followed those ragged standards through the four long years of strife, rushed, regardless of all discipline, from the ranks, bent about their old flags, and pressed them to their lips with burning tears.

“And it can well be imagined, too, that there was no lack of emotion on our side, but the Union men were held steady in their lines, without the least show of demonstration by word or by motion. There was, though, a twitching of the muscles of their faces, and, be it said, their battle-bronzed cheeks were not altogether dry. Our men felt the import of the occasion, and realized fully how they would have been affected if defeat and surrender had been their lot after such a fearful struggle.  (Last Salute of the Army of Northern Virginia, Civil War Trust) 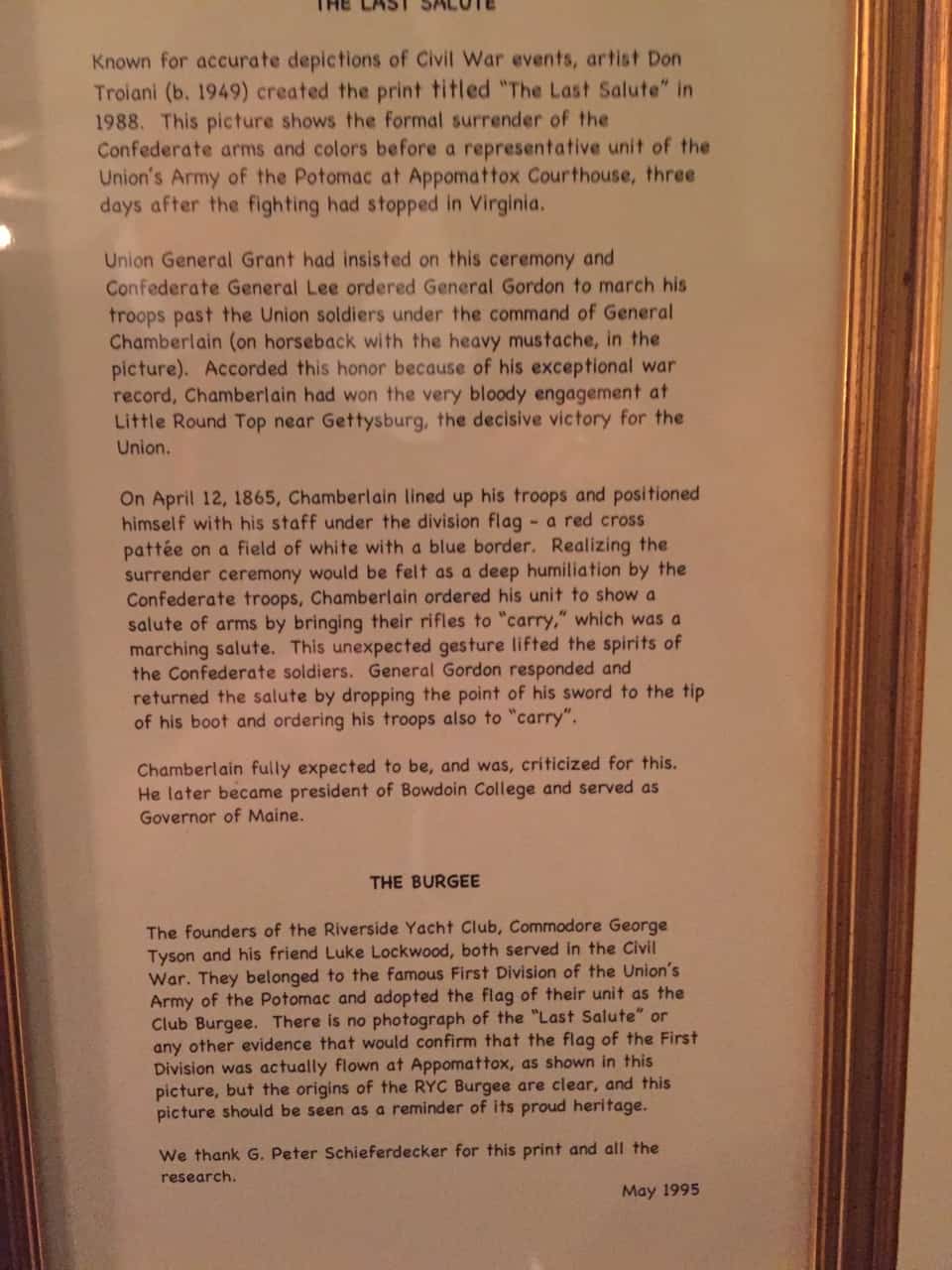 The framed letter which explained the origins of the club’s flag or burgee, a symbol of the unit which the founders served under in the Civil War.

Last Saturday at the doctor’s office, sounds like the screeching of an alley cat erupted from an exam room, dispelling the quiet morning atmosphere. The clerk lifted her eyebrows.

“Sometimes the anticipation is worse than the actual procedure.”

The screams continued for a full minute and afterwards, the mother came out and joined me at the counter for check-out.

“I hope, never again in his life, will he have to deal with such excruciating pain,” she said.

The child returned to the wait room and we observed him on the way out, playing with the marble tracker toy, peaceful and content.

I thought about this visit, not so much the screaming and the procedure, as the mother’s exasperation and comment to the office staff, her emotions all consuming and her perspective completely lacking. It’s a horrible thing to stand by and watch your child in pain, yet life is full of pain and suffering. In a culture so comfortable that a child’s health visit which is in his best interest is the most excruciating pain he’s experienced, it is worth noting the stark contrasts to the world around him. Perhaps it’s easy to forget just how hard life is and can be.

Consider this woman’s statement about pain in the context of the pain felt by our society post-election with its protest marches, violence, and abject despair at Hillary Clinton’s loss, the YUGE upset at he polls, the petitions to get rid of the electoral college, the misbehavior and ugliness from groups around the country, the posts all over social media which label the opposition with hateful mean spirited rhetoric, something the media has fueled for years now.

America has spoken and here’s what we learned: ad hominem attacks and labels don’t work. I am not a white supremacist. I am not a racist. I am not a misogynist. Diversity is more than the color of our skin or our heritage or our income or our education level; it is diversity of belief and thought and experience and action.

My daughter’s friend posted on social media she would never speak to anyone again if he voted for Donald Trump. Here’s what I explained to my daughter. Just because we don’t agree does not make us enemies. The country, our society, our friends need to talk and we also need to listen; we need reasoned disagreement, empathy, and respect for opinions other than our own.

The Bush-Obama transition of the White House was a model of behavior and so was the surrender of General Lee and his troops at Appomattox Courthouse. These men suffered the greatest loss in history on American soil, losing much more than their arms and flags; they lost friends, brothers, a way of life and they gave up four years which they spent fighting for something bigger than themselves. “[They] bent about their old flags, and pressed them to their lips with burning tears.”

There can be dignity, even in surrender.