The World’s Most Powerful Pirate, a Woman – Jorge Luis Borges, the Widow Ching, & a Chinese Parable

Read Borges to understand the world and your place in it.  I have experienced nothing like it before.

Jorge Luis Borges was exceptional, distinguishing himself with his multi-lingual fluency; the Argentine writer learned English before Spanish from his father who was an English teacher and then he learned German and French in his studies in Geneva. In his own lifetime, “Borges’s tales and poems were increasingly acclaimed as classics of 20th-century world literature.”  (Britannica.com)

Erudite and well travelled, Borges was a polymath whose “grasp of world literature is one of the fundamental elements of his art.” (National Review, Peter Witonski).

From his early work, The Universal History of Iniquity, Borges sketches the stories of infamous individuals in history across the globe: outlaws, pirates, the scourge of humanity. Each of the nine stories is just pages long, most drawing on real people and reflecting classic Borgesian touches. Easy to understand and vastly informative, this volume is a perfect introduction to the writer. 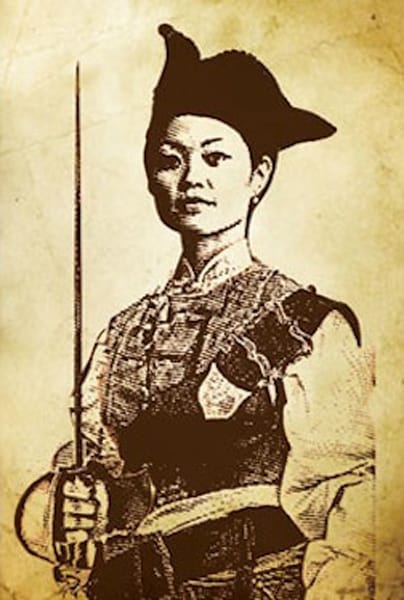 In his sketch, The Widow Ching – Pirate, Borges introduces the reader to “female corsairs” (pirates) in history: Mary Read, “whose bold career…. was interrupted by the Spanish Gallows” and Anne Bonney, a “magnificent Irishwoman of high breasts” whose life ended on the scaffold next to her lover.  In the third paragraph, he writes about “a more daring and long-lived one, [who] plied the waters of far Asia . . . the doughty widow Ching.”

The widow’s late husband, Ching, organized the shareholders of the pirate ships of the Yellow River and commanded the fleet.  Ching did his job so well, pillorying and plundering the river’s coast, that the residents appealed to the emperor for help.

Nor did their pitiable request fall on deaf ears: they were ordered to set fire to their villages, abandon their fisheries, move inland, and learn the unknown sciences of agriculture. (The Universal History of Iniquity, Borges)

This is quite a sentence.

A riverside people left the lives they knew to escape the treachery and violence of Ching’s buccaneers.  The irony of the outcome is that the deserted coastlines forced the “frustrated invaders into waylaying ships, a depredation …. [that] seriously threatened trade.”

So the emperor persuaded Ching to become the “Master of the Royal Stables” and when he accepted, the shareholders of the pirate fleet poisoned him.  Therein rose the story’s protagonist, the now widowed Ching, who explained the details of her husband’s death to all the pirates whom she called together, proposing to them what “might be called freelance piracy.”

And so began “thirteen years of methodical adventuring” of six squadrons, each under its own banner, and with its own rules which were made by the widow Ching herself.

The crew of the ship traveled with their women and that perhaps made the widow’s rules work as well as they did.

The emperor sent down the decree in 1809 to punish the crimes committed by the widow’s fleet. Admiral Kwo-Lang set forth with his expedition to fix the problem.

Almost a thousand ships did battle from sunup to sundown. A mixed chorus of bells, drums, cannon bursts, curses, gongs, and prophecies accompanied the action. The empire’s fleet was destroyed; Admiral Kwo-Lang… himself performed a ritual which our own defeated generals choose not to observe – he committed suicide.”

A masterful sentence begins the next section.

THE TERRIFIED COASTLINES AND RIVERBANKS

Then the six hundred junks of war and the haughty widow’s forty thousand victorious pirates sailed into the mouth of the Zhu-Jiang River, sowing fire and appalling celebrations and orphans left and right.

They razed entire villages, took prisoners and drove people away by the hundreds, seeking refuge and finding themselves enslaved in Macao. Borges’s sentence shows us the devastation done and the size of the menacing force, 600 junks, 40,000 pirates who “sowed” not only fire and havoc, but made children into orphans “left and right.”

The widow’s rules must have been relaxed after defeating the imperial fleet or at least in Borges’s retelling.

It’s not surprising then that the emperor organized a second expedition.  And here’s where Borges and his story may or may not differ from history; in some ways it is more real and more powerful than the records.  And lucky for you and me, it involves a Chinese parable.  Here is Borges at his best and his earliest in this first volume of work; it shows his literary genius.

The widow is “long-lived,” and her fleet lived long on the high seas, but every story has its end.

Grown “soft” and idle on the bounty of the Zhu-Jiang River (Pearl River), the widow’s pirates were cut off by the second imperial fleet when it sailed into the mouth of the river. “She knew it would be hard, very hard, almost desperate” and so began the beginning of the end of a battle that did not begin. 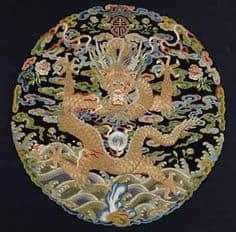 An embroidered dragon motif from the Emperor’s surcoat: 1723-1795

THE DRAGON AND THE VIXEN

And yet each evening, lazy flocks of weightless dragons rose high into the sky above the ships of the imperial fleet and hovered delicately above the water, above the enemy decks. These comet-like kites were airy constructions of rice paper and reed, and each silvery or red body bore the identical characters. The widow anxiously studied that regular flight of meteors, and in it read the confused and slowly told fable of a dragon that had always watched over vixen, in spite of the vixen’s long ingratitude and constant crimes.

The moon grew thin in the sky, and still the figures of rice paper and reed wrote the same story each evening, with almost imperceptible variations. The widow was troubled, and she brooded. When the moon grew fat in the sky and in the red-tinged water, the story seemed to be reaching its end. No one could predict whether infinite pardon or infinite punishment was to be let fall upon the vixen, yet the inevitable end, whichever it might be, was surely approaching.

The widow understood. She threw her two swords into the river, knelt in the bottom of a boat, and ordered that she be taken to the flagship of the emperor’s fleet.

It was evening; the sky was filled with dragons — this time, yellow ones. The widow murmured a single sentence, “The vixen seeks the dragon’s wing,” as she stepped aboard the ship.

There are enough spoilers in this letter, but to leave an element of surprise and an incentive to read Borges, I will share that he does add an “Apotheosis” about the rueful widow.

*  Borges listed an Index of Sources for this collection The Universal History of Iniquty. For this story the Widow Ching – Pirate, the work is cited in case the reader wants to check, as the translator Andrew Hurley did, to determine the accuracy and creative license in the retelling.

** Ching Shih (1775–1844) was a prominent pirate in Qing China who terrorized the South China Sea in the early 19th century. She commanded over 300 junks manned by 20,000-40,000 pirates. Another estimate has Cheng’s fleet at 1,800 and crew at about 80,000 — men, women, and even children. She challenged the empires of the time, such as the British, Portuguese and the Qing dynasty. Undefeated, she would become one of China and Asia’s strongest pirates, and one of world history’s most powerful pirates. She was also one of the few pirate captains to retire from piracy. (Wiki Link)