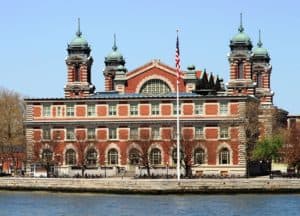 “The field trip was a huge disappointment.  It took us four hours of driving, two ferry rides, and we had half an hour in the museum,” my son said.

“Did a guide or a ranger give you a tour?” I asked.

“No. Our teacher told us to do three things. We had to sketch something from the museum and that took up most of the time.”

“Harrison’s clock.  A picture of it anyway.  [Outside] I did a rubbing of Shaws and one Shattan, the name was spelled differently than ours.  There wasn’t time for anything else.”

My son said his school had extra money in the budget and his class “learned” about Ellis Island ahead of time which is a good thing because he didn’t learn much there. During the visit, he wrote in a blank passport about his feelings and took a rubbing of immigrant names, the other tasks his teacher assigned.

On the first page, he wrote about how it felt to come to America.

America seems very sophisticated and modern with the Statue of Liberty and the artificial island. It also seems very powerful with great buildings and waterways. I’m excited about living in a great place where I could make a good living. I am scared of discrimination from England.

On the second page, he wrote what he thought about the immigration process.

I feel inhuman, like I am being tagged and prodded, and sent to different places. I think they do it to keep us organized.

This second page seemed like a coaxed response and my son told me that his teacher said this in class, so that’s what he wrote.  Immigrants might have felt this way, but that is speculation. First person accounts however are not, and the museum has such exhibits, a valuable tool for study as a primary source. But my son didn’t see or read these.

I had hopes about Ellis Island, having never been there myself, thinking what an opportunity for him to enlighten  us, maybe making a separate visit as a family.

Instead, educators with their zeal for humanism and sensitivity and empathy had him fill the visit imagining feelings, and he, who is open minded, curious and not the least, generous, found the visit a huge let-down. This type of assignment is not an aberration, it’s commonplace.

The educational establishment favors values and sensitivity awareness over knowledge, because knowledge is passé.  A reputable psychiatrist informed me that she helped her children choose colleges where there were no general education requirements; the students could choose their own classes.  This sentiment is part of the problem. And we wonder why 62% of college graduates don’t know the length of a congressional term. (Link to letter: Why Colleges Are Failing Our Students: Harvard Gets a “D” and Brown Gets an “F”)

Oh where is Richard Mitchell when we need him? Deceased unfortunately.  The man, otherwise known as the Underground Grammarian, exposed this educational fluff for what it is, and that was 35 years ago!  See if you don’t recognize the flavor of this Passport assignment in his example which he aptly dubbed the Columbus Gap.

It is what Simon would call a “sensitivity module,” and here is a more likely example:

In teaching elementary children about the early world explorers, one teacher had her children go out and actually “discover” new parts of the city. One instruction was to “find a new and faster route to the ball field.” The gap between the world of Columbus and their own world in the city was narrowed. (Less Than Words Can Say, Mitchell,  88)

And what can that mean–to narrow the gap between us and Columbus? Those things that separate us from Columbus–can they be taken all together and understood as a “gap”? If so, in what way, exactly, is the gap “narrowed” when we find a quicker way to get to the ball field? When we eat blubber, do we narrow the gap between us and the Eskimos? When we walk around blindfolded for an hour, do we narrow the gap between us and the blind? They do things like this in school–not just in the public schools but even and especially in the schools that produce the teachers for the public schools. All such “gaps” are very large and complex, and to understand them and to have knowledge about them will require that we first make many statements of fact. To “feel” like an Eskimo and to know what being an Eskimo involves are utterly different things. The former is probably impossible for non-Eskimos. The latter can be achieved by anyone who will attend to statements of fact. Ten thousand sensitivity modules will not teach us how it is with men who sail into the utterly unknown; to read their words just may give us an inkling. (Link to Essay by Mitchell, 90)

And just how far have we’ve come since the Columbus Gap exercise?

My son’s travel time to Ellis Island by bus and by boat was five, close to six hours, which made the limited time on the island that much more valuable, to be utilized well. The teachers collected all the phones and on the way there the students watched Pirates of the Caribbean and on the way home Ferris Bueller’s Day off. 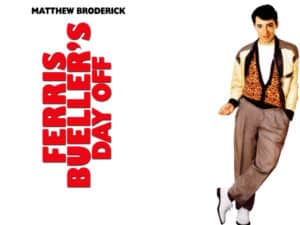 He visited the immigration site of 12 million Americans whose descendants make up close to a third of the U.S. population so he could write HIS feelings about coming to America!?

What can a 13 year old know about famine and hunger, hardship, religious intolerance, leaving everything you’ve ever known behind?

I believe in a classical education and that is out of fashion today.  But here’s what that means.

If I want my child to understand the role of Ellis Island in shaping our nation, he must study the historical facts; if he wants to understand what it might have felt like, he must “read their [immigrants’] words just to give him an inkling.”

“We have traded skill in language and number for ethical behavior, personal philosophy, moral commitment, creativity, and emotional health …   None of the lofty goals named above can be approached without the skillful practice of language and thought, and to “emphasize” those “areas” in the absence of that practice is to promulgate thought control rather than the control of thought.”  (Mitchell, 95)

Given what I’ve seen of modern humanities education, it is no surprise that my son wrote about being prodded and tagged, as if he were inhuman.  Had he studied facts about Ellis Island he might have concluded very differently. Here is the summary from the History and Culture webpage of the National Park Service which operates the park.

From 1892 to 1924, Ellis Island was America’s largest and most active immigration station, where over 12 million immigrants were processed. On average, the inspection process took approximately 3-7 hours. For the vast majority of immigrants, Ellis Island truly was an “Island of Hope” – the first stop on their way to new opportunities and experiences in America. For the rest, it became the “Island of Tears” – a place where families were separated and individuals were denied entry into this country.  (NPS site link to History and Culture of Ellis Island)

Stop and consider that for a moment.  Just 3-7 hours later, people unknown to the country gained legal entry and the right to begin a new life. Now, compare that to today’s process. The “rest” who were sent home, about 2%, were denied entry because of “chronic contagious disease, criminal background, or insanity.” (Wikipedia)

To give my son perspective on the facts, since they were in short supply during this field trip, I asked him about our visit to Dachau, the Nazi concentration camp. Did he think that process inhuman? did those entrants feel tagged and prodded?  The feelings these people experienced and those of the Ellis Island immigrants are two very different things.

Schools want to educate children through sensitivity training and feelings and here’s the result:  confusing two historical sites whose role in history could not be more diametrically opposed.  Only through close examination of the facts and history in Dachau and at Ellis Island can a student begin to comprehend their place in history.

****      To read more about what passes for education today, click on these titles:

Why Students Don’t Write Well – the PSAT and English Today

Why Colleges Are Failing Our Students: Harvard Gets a “D” and Brown Gets an “F”