There are three types of people in this world: the sheep who go about their business, the wolf who feeds on the sheep, and the sheepdog who protects the flock.

Last year I sent friends an essay from Lieutenant Colonel Dave Grossman who wrote about this analogy, one he heard from a retired Vietnam veteran. Like a parable or fable, it helps us understand reality.  Many Americans are hearing the comparison for the first time in the blockbuster movie, American Sniper.  Although it is not mentioned in Kyle’s autobiographical book, screenwriter Jason Hall wrote it into the script.

I’ve given some thought to this since I left the theater.  What type of person am I?  I wondered whether we have a choice in the matter, or if we are simply born as sheep, to live and die as sheep.  In the movie, it’s clear what type of life Chris Kyle lived. 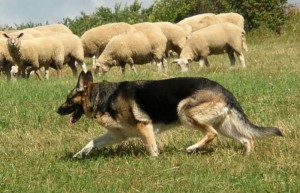 In an early scene, Kyle’s father lectures him after a bullying incident when he defended his younger brother who was beaten up in the schoolyard.  The father tells his sons about the three types of people in the world and, in no uncertain terms, just what he expects. There are no sheep in his family and heaven help them if they behave like a wolf.  He sets his belt on the table to show that he means business.

I love parables and stories and share many in this letter (see tab above).  This scene surprised me because I knew the origins of the story, though it certainly fit the movie’s narrative. I wondered if the vignette actually occurred.  What did not surprise me is the predictable media response.

Here is an excerpt from Dave Grossman’s essay.

One Vietnam veteran, an old retired colonel, once said this to me:

“Most of the people in our society are sheep. They are kind, gentle, productive creatures who can only hurt one another by accident.” This is true. Remember, the murder rate is six per 100,000 per year, and the aggravated assault rate is four per 1,000 per year. What this means is that the vast majority of Americans are not inclined to hurt one another. Some estimates say that two million Americans are victims of violent crimes every year, a tragic, staggering number, perhaps an all-time record rate of violent crime. But there are almost 300 million Americans, which means that the odds of being a victim of violent crime is considerably less than one in a hundred on any given year. Furthermore, since many violent crimes are committed by repeat offenders, the actual number of violent citizens is considerably less than two million.

Thus there is a paradox, and we must grasp both ends of the situation: We may well be in the most violent times in history, but violence is still remarkably rare. This is because most citizens are kind, decent people who are not capable of hurting each other, except by accident or under extreme provocation. They are sheep.

I mean nothing negative by calling them sheep. To me it is like the pretty, blue robin’s egg. Inside it is soft and gooey but someday it will grow into something wonderful. But the egg cannot survive without its hard blue shell. Police officers, soldiers, and other warriors are like that shell, and someday the civilization they protect will grow into something wonderful.? For now, though, they need warriors to protect them from the predators.

“Then there are the wolves,” the old war veteran said, “and the wolves feed on the sheep without mercy.” Do you believe there are wolves out there who will feed on the flock without mercy? You better believe it. There are evil men in this world and they are capable of evil deeds. The moment you forget that or pretend it is not so, you become a sheep. There is no safety in denial.

“Then there are sheepdogs,” he went on, “and I’m a sheepdog. I live to protect the flock and confront the wolf.”

Like Michael Moore and Howard Dean, the culture writers at Slate are upset by the movie’s success and they find this story especially egregious.  Here Michael Cummings and Eric Cummings conclude with their own sniper fire.

Because the analogy is simplistic, and in its simplicity, dangerous. It divides the world into black and white, into a good-versus-evil struggle that the real world doesn’t match. We aren’t divided into sheep, sheepdogs, and wolves. We are all humans. (Slate’s “Surprising History of Sheepdog Speech”)

Masters of the obvious: of course we are not animals.

The Cummings brothers need to do their research, because Grossman has.  Grossman’s credentials are too numerous to list, but here a few.  Lieutenant Colonel Dave Grossman served for twenty-four years as soldier, infantryman, and army Ranger.  He was a psychology professor at West Point  and author of  On Killing, the Psychological Cost of Learning to Kill in War and Society, a book on the United States Marine Corps Commandant’s Required Reading List and a book which has become required reading at West Point and other military schools.

I graduated from West Point before Grossman wrote this book, but leadership, military science, and the philosophy of war were and are required study.  Interestingly, Grossman’s research is the first ever conducted on the act of killing.  If Cummings read only the essay, he would have understood Grossman’s conclusion whether he agreed or not.

Here is the point I like to emphasize, especially to the thousands of police officers and soldiers I speak to each year. In nature the sheep, real sheep, are born as sheep. Sheepdogs are born that way, and so are wolves. They didn’t have a choice. But you are not a critter. As a human being, you can be whatever you want to be. It is a conscious, moral decision. (Grossman on Sheep)

Human beings are infinitely complex creatures and Grossman explains this to a greater extent not only in this essay, but in his book.

Parables and stories are meaningful tools for us to understand and navigate our way in this crazy world. The beautiful thing about this story, is its ability to model society and  encourage us to contemplate our role in it.

Here’s what I learned about the sheepdog analogy. Each of us, every one, makes his or her own decisions on just what kind of person she chooses to be.

** I recommend reading the essay in its entirety.  It’s worth your time.  (Link to Grossman’s On Sheep, Wolves, and Sheepdogs) 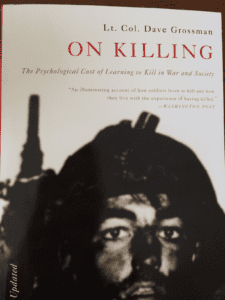 On many military reading lists, Grossman’s book On Killing

Short take Writer's Toolbox Em-dash Book recs So says the lexicographer and usage genius Bryan Garner. My desk copy of the 4th edition of Garner's Modern English Usage states on page 750, "The em-dash is perhaps the most underused punctuation mark in American...

Books for Mothers and Daughters

Short Take, 2 min read Mother's Day Book recs, ages 9 to 99 AVAILABLE ON PODCAST CLICK HERE It's a gray day full of drizzle in Connecticut though it's not as cold as it has been. The yellow lilies in the porch planters are in full bloom and they remind me of my...

What Makes a Speech Great? An Admiral Tells 3 Stories

6 min read Writer’s Toolbox Public speaking AVAILABLE ON PODCAST HERE Admiral McRaven commemorates the 11th Anniversary of Operation Neptune's Spear What makes a speech great? There are a lot of good speeches and good speakers. But a great speech is one you remember....

Exercises in Style: a Writing Tribute

3 min read Book rec Writing Toolbox Wordplay Ages 9 to 99 AVAILABLE IN PODCAST HERE Titles begin with letters as human forms Narrative One day at about midday in the food line, behind the checkout of a more or less busy Costco, I observed a person with a very big...

1000 Push-ups? Getting Comfortable with Being Uncomfortable

6 min read Memoir rec Work-outs, push-ups and running AVAILABLE ON PODCAST CLICK HERE Get comfortable with being uncomfortable. That’s the short take on Living with a SEAL*, 31 Days Training With the Toughest Man on the Planet. Jesse Itzler, the author, is fit by most...

Bedside Counselor on Parenting in Anger, in Two Translations

6 min read Book rec Prose for emergencies Writing feature AVAILABLE IN PODCAST, CLICK HERE For solace and for counsel, I have several books I find myself returning to again and again, and to this one, most recently, as my third child prepares to leave home.* For...

What I Learned Walking With a Friend

8 min read True Story Military service Road walking, trail notes AVAILABLE IN PODCAST - CLICK HERE Not 30 miles as the crow flies, that’s how far I was from my childhood home. It was gray and threatening rain, the time in spring that’s cool, tree buds just coming in,...