Why Students Don’t Write Well – the PSAT and English Today

Many children struggle to write well today.  Here’s the number one problem they face.

First let’s consider their writing skills.  See how you fare on these three questions from a full length PSAT or Prelimary Scholastic Aptitude Test, the precursor to the SAT.

Choice A repeats the original phrasing.  “Your selection should result in the most effective sentence – clear and precise, without awkwardness or ambiguity.”

5. The great sixteenth-century Mughal ruler Jalaluddin Muhammad Akbar turning his city into a center of learning and inviting holy men from all of India’s different religions to come to discuss metaphysics.

13. Senator Garcia has four children, two of whom have decided to follow their father into public service.

Identify the error in the following if there is one.

23. Farmers who face droughts, tornadoes, and   have falling prices    for   their crops    must often work  for long hours seven days a week.   No Error.

Just what is the PSAT?

Students nationwide will take this test in their junior year as preparation for the SAT.  Many will also take it in their sophomore year so they can identify weaknesses and work on a strategy for improvement.

Why is it so important?  Because colleges look at standardized test scores as the most significant factor outside of GPA (grade point average) and in many cases as the leveling mechanism to compare students from schools with vastly different grading criteria.

My sophomore daughter took this practice test and stumbled on the above questions.  To choose the correct answers, students must understand sentence fragments, relative clauses, and parallel construction.

Why don’t students know the answers?

Luckily in my daughter’s case,  she studied Latin for several semesters and learned one year of English in “homeschool” during the year she left the district and traveled [link Homeschool & Travel].  I chose the best program I could find, Rod and Staff’s Building Christian English Series.

She had to study English 6 as an 8th grader because she could not begin English 8 without understanding sentence construction and diagramming, usage, parts of speech, and mechanics.  I taught three levels of Rod & Staff English and was amazed at how much I learned in the process, or in truth, how much I had never learned in the school system.

The problem in schools is so insidious and pervasive that students in my district take Latin class so they can learn English.  This may be a good strategy in the complete absence of instruction of our language.

Ok, I admit I exaggerate, but not by much.

My daughter told me that her tenth grade honors literature class spent the last week working on complex sentences. I assume they also discussed simple and compound sentences. These are, by the way, the three structural types of sentences, a topic once taught in primary school.

The refusal to teach English

The educational establishment favors learning  acquired through observation, use, and exposure, an osmosis of sorts which just sort of occurs.  And largely it does, at least for children of native speakers.  But without study and instruction, these same students get around to taking the PSAT and the SAT, and they haven’t the faintest idea how sentences work or how to improve a paragraph. Not surprisingly, more and more employers find graduates’ writing skills are deficient.  ( See Why Colleges Are Failing our Students – Harvard gets a D and Brown gets an F)

So ask yourself, why then, do they draft such questions as the ones above when students have never even heard of a relative clause?

And just how should students divine the answers? Each year we read about the National Merit Scholars.  These scholarships are awarded to the highest scoring students on the PSAT. Who are these scholars anyway?  They are the best and brightest students who figured out how language works, not in school, but by taking lots of tests, and reading the College Board explanations for incorrect answers.

Perhaps the Merit Scholars hired tutors, completed an expensive prep class, and studied on their own outside of school. This seems the route parents have to take if they want their children to write well.

In his column “Grammar is a vital tool for any executive,” Financial Times columnist Michael Skapinger said it well:  “They [people] are victims of a damaging educational fashion: the refusal, throughout much of the English-speaking world, to teach children grammar.” (Link to column)

Students are no more prepared to enter the workforce and write a coherent letter than they were prepared to answer the 39 questions on the above PSAT writing skills section.

Chances of this happening in schools are slim, so check out the College Board’s “Blue Book” which includes 10 official practice tests with examples of effective writing and explanations of correct answers.  Better yet, invest in a good English program or text for your children. 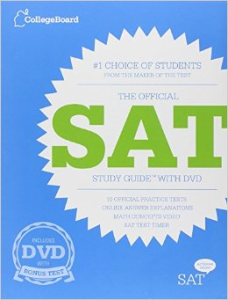 ** Here are the College Board explanations for the three questions. [link to online answers]

The great sixteenth-century Mughal ruler Jalaluddin Muhammad Akbar turned his city into a center of learning by inviting holy men from all of India’s different religions to come to discuss metaphysics.

Choice (E) is correct. It avoids the sentence fragment of the original by replacing the present participle “turning” with the main verb “turned.” In addition, it replaces the conjunction “and” with the preposition “by,” which appropriately indicates how Akbar “turned his city into a center of learning.”

Senator Garcia has four children, two of whom have decided to follow their father into public service.

Choice (A) is correct. It avoids the errors of all the other options by properly joining an independent clause (“Senator Garcia has four children”) and a relative clause (“two of whom have decided to follow their father into public service”) with only a comma.

Farmers who face droughts, tornadoes, and falling prices for their crops must often work long hours seven days a week.

The error in the sentence occurs at (B). The participial phrase “having falling prices” is not parallel with the other two nouns in the series, “droughts” and “tornadoes,” and should be replaced with the parallel noun phrase “falling prices.”