If you were wondering why college graduates are struggling to find jobs, this explains part of the problem. Many colleges don’t require core subjects like U.S. government/history, literature, and mathematics. Instead, they have replaced the general education curriculum with a “study what you want” philosophy.

Almost 62% of college graduates do not know the length of congressional terms and 40% don’t realize the U.S. Constitution establishes separation of powers. One third of grads don’t know which president spearheaded the New Deal and over half don’t know which president played a major role in the Panama Canal. (Source American Council of Trustees and Alumni, GfK surveys)

If you’re a parent considering colleges for your children, take the time to learn about these institutions of “higher learning.”  You will be shocked. You may reconsider spending $40,000 to $50,000 for a big name school. (ACTA Survey link) 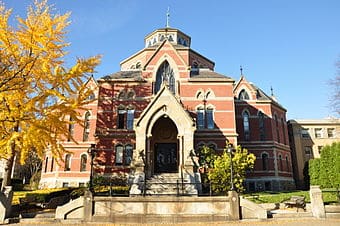 Brown University, one of the 98 schools that received F’s

On my state report card,  Yale earns a “D” and Wesleyan an “F” though it’s interesting to note that they have two of the highest graduation rates, 90% and 86%.  Maybe that’s what happens when students don’t study math, history, literature, composition, or economics. 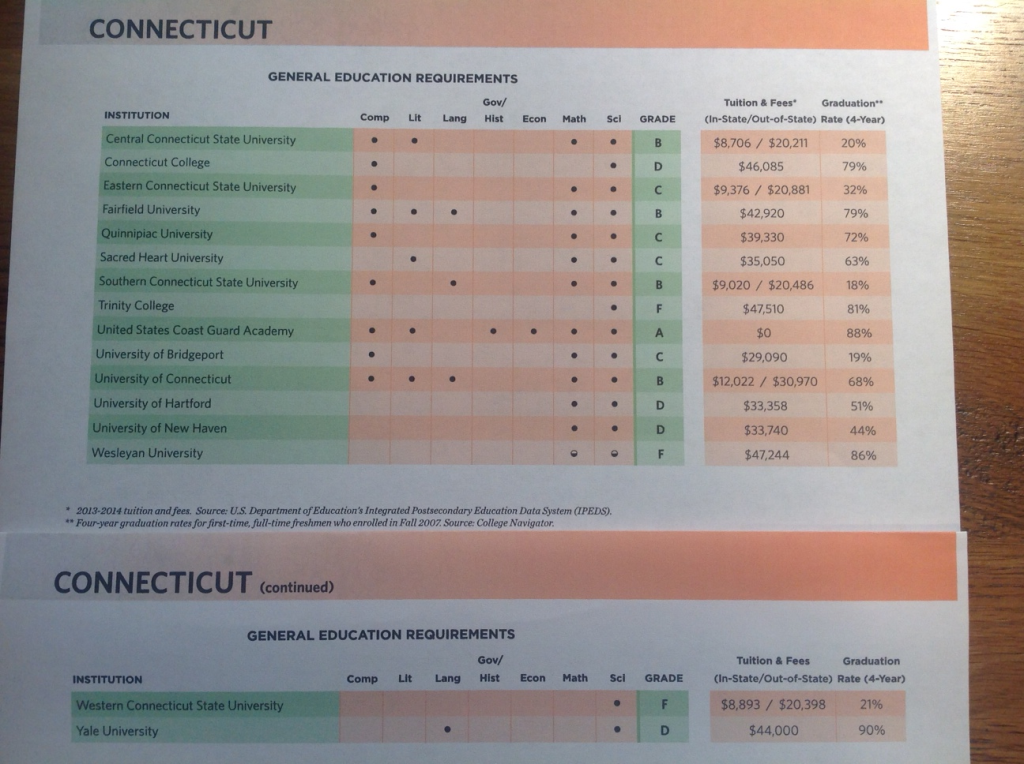 The grading system is simple.  The study explains the necessity for core subjects and evaluates colleges like this: an A for 6 to 7 subjects required, B for 4 to 5, C for 3, D for 2, and an F for 0 to 1 subjects.

Unlike U.S. News and World Report and other rankings, this survey is the first I’ve seen which grades colleges and universities  on the most important issue, what students learn.  The other systems, by comparison, use selectivity, reputation, and alumni donations.  The key findings in this report revealed a disturbing paradox, among schools receiving an “F” from the survey, the tuition rate is 26% higher than schools receiving an “A.”  “The higher the tuition, the more likely it is that students are left to choose their own “general education.”” (What Will They Learn survey, p. 14 & foreword)

Reasonable people may disagree on what constitutes the general education curriculum and arguably this list should include additional subjects such as philosophy, music, and psychology.  But the survey reflects seven essential subjects needed for a 21st century liberal arts education:  composition, literature, language, U.S. government/history, economics, mathematics, and natural or physical science.

It astonishes me when I look through the list, that students can graduate from higher institutions of learning and reputable schools without completing a history or math class. It’s more disturbing to consider the prices paid for this. A whopping 87% of employers believe colleges need to raise the quality of student achievement and 63% believe grads don’t have the skills to compete.  What’s especially interesting is what graduates themselves think: just 39% of graduates believe college prepared them well to succeed. **

So can students still get a good education at Yale, Brown, or Harvard? That depends on which cafeteria style selections they choose. “No 18 year old, even the brightest, should be given the task of determining which combination of courses comprises a comprehensive education.” (ACTA Survey) Letting them do so results in an odd list of random, unconnected courses.

The Wall Street Journal reported reactions to the survey.  Brown University was not available for comment and Wesleyan declined to comment.  Here is the response from Whittier:

Sean Morris, chairman of the English Department at Whittier, said the survey was superficial. The school has an interdisciplinary approach, so a history curriculum might be wrapped into an art or science course, and composition might be tied to math.

“We don’t mandate every single student take a class in American history…so you may find a senior not knowing the specifics of the New Deal,” he said. “But you will graduate knowing how to think and how to accumulate that knowledge and make connections between things.”  (WSJ, Oct 15)

The success of a representative democracy requires an educated citizenry.  Graduates of these colleges did not have to take U.S. history, though they “might” divine a history curriculum from a class in art or science assuming they sign up for such classes.  But do not worry! because they will know “how to think” and “make connections.”  They could as easily sit down to dinner to discuss the presentation and flavor of the evening meal without food on the table.

Take the time to see for yourself, read the 22 page report, or check on schools to determine what’s required and study their report card. ( report card by college or state here)

There are some interesting selections in the cafeteria line.

As has been noted, many colleges and universities give the appearance of strict requirements, but allow students to satisfy the mandate by choosing from a long eclectic list of courses. This is commonly called a “cafeteria-style” curriculum. The following are a few of the interesting general education classes we found in our research:

• Vassar College: The requirement for a freshman seminar may be met by “America Television Comedy.”

• Chadron State: Among the first year seminars offered is “Wizards and Vampires in Film, TV and Literature.”

Overall, the results are troubling. The grade tally tells the story:

Less than half of the schools studied require:

* Answers to the questions are 6 year term for senators, 2 year terms for representatives; Franklin D. Roosevelt for the New Deal; Theodore Roosevelt for Panama Canal.

** Studies published by the Association of American Colleges and Universities, the Conference Board/Partnership for 21st Century Skills, and the Social Science Research Council have found that: