“Who goes? who gets left behind?” – Last Days in Vietnam

Hurry up.  Last Days in Vietnam is playing in Pelham, New York until Thursday, October 16.  Book your tickets online [Link for tickets], because the screening room only has 12 seats.

We watched the documentary with seven other people, starved for action on a Saturday night, they too hustled to the Pelham Picture House to witness or perhaps relive the exodus and the pain.  Save for one large gentleman our age, the other six were seniors, young adults at the time of the evacuation, maybe a veteran or two.

Vietnam consumed the airwaves, the conversation, and the lives of Americans in 1975.  I had a lot to say about this documentary produced by Rory Kennedy before I saw it [Link to letter]:

This [film] may be the Kennedys’ idea of an apology, so be it, but perhaps it is an obligation to her uncle’s conscience as well as her own almost 40 years later. Our departure from this fledgling, struggling country in its hour of need is a disgrace on many levels.

We did not lose on the battlefield during the war. We lost at home.

“You know you never beat us on the battlefield,” I told my North Vietnamese Army (NVA) counterpart, Colonel Tu, during a meeting in Hanoi a week before the fall of Saigon. “That may be so,” he replied, “but it is also irrelevant.” (Colonel Harry G. Summers Jr. full article link)

I haven’t changed my mind.

We watched 98 minutes of film footage from the final days and interviews with Americans, diplomats, and Vietnamese who were there.  But it is too little too late. 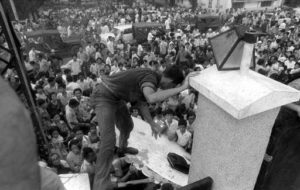 Maybe this documentary is the first public account of the events. How sad that it took this long to get the story out?  And who’s around to hear it?  All nine of us at the Pelham theater.

The movie tells the story of the chaotic scramble in the last couple weeks when the Americans in Vietnam realized there was no aid or support coming from Washington. Whatever had to be done, they needed to do on their own.

In the end, the United States turned its back on South Vietnam.   Congress refused President Ford’s emergency request for air support and ammunition to protect Saigon from the onslaught of the Communist North Vietnamese and the White House ordered the evacuation of U.S. citizens. The Soviet-equipped North Vietnamese Army knew this was the green light to head straight for Saigon despite signing the Paris Peace Accords in 1973.

U.S. Army Captain Stuart Herrington said it was a terrible moral dilemma to leave our South Vietnamese friends and allies to die.

That left the Americans on the ground, who were led by Ambassador Graham Martin, described in the film as a courtly gentleman who felt honor-bound not to abandon his post nor to panic the South Vietnamese people with whom he had come to feel strong allegiance. While Martin held firm against evacuation as the North Vietnamese troops headed toward Saigon, his military aides came up with a “black op” strategy, whereby they secretly got their South Vietnamese allies and their families out of the country by boats, planes and any subterfuge necessary. (Washington Post review link)

“Sometimes there’s an issue, not of legal and illegal, but right or wrong,” Said Captain Herrington. When he left, he explained that he was going to the restroom to the 420 Vietnamese nervously waiting for another helicopter.

“I felt absolutely awful,” he said. “It was just so serious and deep a betrayal.”

Tens of thousands of South Vietnamese escaped on planes and a flotilla of American and Vietnamese boats because of Americans on the ground who were willing to risk their careers and their lives.

Here’s what I realized Saturday night when I left the theater. Governments and bureaucracy will fail us.  But individuals like Captain Herrington,  USS Kirk Captain Paul Jacobs, and Ambassador Martin know right from wrong and they will do their best to do the right thing.