The New York Times Magazine ran a feature on women at West Point this month which touched on historically controversial issues such as female enrollment and women in combat arms. I thought I’d share my insight on these issues as a female graduate of the Class of 1991, the eleventh class with women.

Here are the opening paragraphs.

The Women of West Point

In his opening remarks to the graduating class at the U. S. Military Academy at West Point in May, President Obama called out four cadets by name. Three of them were women: Austen Boroff and Erin Mauldin, leaders in one of the academy’s four regiments, and Calla Glavin, a Rhodes Scholar and lacrosse goalie. At the ceremony’s close, Obama was succeeded by the chain of command, which ended with the top cadet — Lindsey Danilack, just the fourth woman to hold this position — giving an order. “Class of 2014, dismissed,” she said.

From its founding in 1802, on George Washington’s earlier recommendation, until 1976, West Point admitted no women. Since then, more than 4,100 have followed in the steps of the first 62 female graduates in 1980. Many more are on the way, too, now that the American military will be opening combat positions to qualifying women by 2016. The 263 female cadets who started at West Point this year made up 22 percent of the incoming class, a record number, up from 16 percent last year.

The rest of the article is a photo journal in three parts: Great Expectations, Making the Grade, and Marching On. The photos and captions tell the story.  See them and the full article here, NYTimes Magazine article.

Much of this mirrors my own experience. Like Lindsey Danilack, I was Captain of the Women’s Track & Field team and I ran the 400 meters and the 4 X 400 relay. Cadets also hold military jobs. Danilack rose to the highest position as the First Captain or Brigade Commander. I was a Cadet Captain in the role of Regimental Executive Officer. 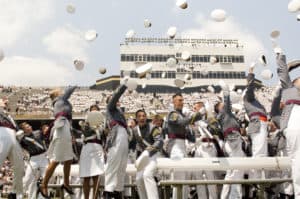 President Obama spoke to this year’s graduating class and mentioned four graduates by name, three of them female.

I didn’t like it when I was a cadet and I don’t like it now. Let me explain.

I don’t think cadets should be singled out based on gender, religion, or ethnicity alone. Distinction should result from achievement, contribution, or merit. Saying a cadet did well AND she’s a girl is like placing an asterisk by her name in the record book. People will ask if she was recognized because she was a girl filling some secret quota. Did she earn it?

Diversity has become a code word for distinguishing what makes us different, whether that is skin color, gender, or religious preference. Diversity should be about integrating those differences and valuing diverse opinion and experience. This is how a team works. Team members don’t sit around and say, well she’s a girl and on the dean’s list or he’s black and an expert marksman. It’s this simple: she’s on the dean’s list and he’s an expert marksman. Let the achievement speak for itself.

This quote from First Captain Lindsey Danilack sums up my attitude.

We’re all trying to accomplish very similar goals, regardless of gender.

That’s something the President would do well to recognize.

My 1991 class had the distinction of graduating the 1000th woman and since then over 3000 have followed. The 263 female cadets who started this year make up a record 22 percent of the incoming class or about double the number when I was there.

The amount of women in the new class is a record high and the Pentagon policy to enroll an even more diverse class in terms of women raises concerns.   Pushing numbers above the ‘natural enrollment’ rate reflects an agenda and not individual interest or qualifications. In 2013, women made up 16 percent of the Total Army (army.mil link ) and this is similar to historical numbers at West Point. Why then does the class need women to make up 20 or 22 percent? Or a number the Superintendent, Lieutenant General Caslen, threw out, 50 percent women in a class?

Combat arms will be open to women in 2016. This includes historically all male branches like infantry and armor. Cadet Arianna Efaw said cadets are skeptical about her interest in the infantry. This is a divisive issue because the role of women in modern combat arms is untested and the physical differences between men and women are real. Cadet Oriana Ellis acknowledges this in the article.

Oriana Ellis (right): “I always came in here with the mind-set that anything a guy could do, I could do. . . . I never really got the mental check until combatives, when I had to fight a guy that was the same weight as me, and my M.C.L. was sprained within the first couple seconds, because I didn’t realize that guys were actually more dense than girls.”

The physical fitness standards are lower for women. Women earn the same score for slower run times and fewer push-ups. Sit-up scores are the same for both.

The different standards reflect equal measures of fitness for the genders I believe. I have not seen data to support this assumption, but there’s been a lot that went into their development.

Women candidates for combat arms should meet the same standards as men and be expected to carry the same load. In a combat situation, the enemy doesn’t care. Yet even if a female meets the physical requirements, there are social concerns. The camaraderie and unit cohesion may be disrupted and men may compromise the mission to save a woman. 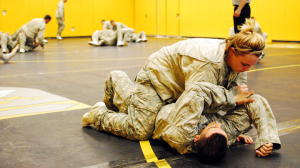 It’s a complex issue with valid concerns and arguments on both sides. I’m open minded because I’m a graduate of what was once an all-male institution. West Point survived the inclusion of women and is better for it.

How’s that for bias?

The three Efaw sisters in this article are cadets like their parents were. Colonel Andrew Efaw’s photo is in my Howitzer yearbook from 1989 and he graduated in the same class as my brother.

I believe my own children think about West Point like the Efaws. Living only seventy-five minutes away, West Point is part of their lives and college means more than an education. I have two daughters and I used to be troubled when people asked if I would “let” them go to West Point and join the Army.

I’ve since realized there are few better choices they can make.