People made over 18,000 attempts to remove books from schools and libraries since 1990, according to the American Library Association  (ALA article link).  Here are the Top Ten Most Frequently Challenged Books (scroll to bottom). My family read six of them, so we have more reading to do to understand the fuss over the other four.  The Top Ten books range from dystopian novel Hunger Games to Captain Underpants and graphic novels like Jeff Smith’s Bone. 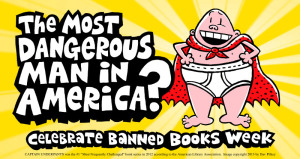 And then there is the soft ban on certain books.  Let me explain.

My youngest child begged to read Hunger Games (HG) in third grade because the rest of the family already read the trilogy, myself included.  The Lexile Rating for HG is  810L and this was well in her reading range. The Lexile Framework was developed in 1989 to match readers of all ages with books at their reading level and the developers argued that it is valid and reliable.  I first learned about it from the school.  What’s interesting is I had not used the ratings until this situation and it proved helpful. Critics note flawed ratings and other legitimate concerns, but the Lexile is a tool like any other, to be used along with sound judgment of qualitative factors.

Here is a table with ratings.   (To learn more about the Lexile Framework and find ratings on a particular book, click here.)

Third grade may seem young for Hunger Games, but my daughter Laura was ready.  I read Tom Sawyer (950L) to her that year and she read Ranger’s Apprentice (920L) on her own.  At the time, I was reading Rosemary Sutcliff’s Iliad, Black Ships Before Troy (1300L) to her.

Laura came home upset from school one day.  The teacher saw her reading HG during Independent Reading time and called her over, explaining that she was not allowed to read it in school.

I wrote the teacher that evening.

Laura told me what happened today and I was surprised to learn she is not allowed to read her book at school.   Her siblings, my husband and I have read the Collins trilogy and Laura is now reading the second book.   I see this as a read for more engaged readers in grade school and not allowing her to do so is censorship of a kind.   HG has a Lexile rating of 810 which is more than suitable for 10 year olds or 4th graders and Laura reads at that level.

Please let me know why it is banned at School. We are reading Homer’s Iliad, the illustrated work by Sutcliffe and if carnage and pillage are of concern, then the School may have to ban the Greek myths.  Collins based her book on the Greek myth of the Minotaur and the youth tributes sent annually to their death in its labyrinth.

I appreciate that you are enforcing policy and perhaps the district, the principal or the librarian compiled the list. You are welcome to pass this Email along.  As we are a family of voracious readers, I would like to have the list of books considered ‘inappropriate’ or banned at School X.

The teacher wrote back the next morning, stating she referred my letter to the principal. She said my daughter “displayed great fluency and comprehension” in her reading, but she did not mention her decision, saying instead that she “hoped Dr. Principal could answer my questions” about HG.  Later, Dr. Principal saw me at a school function and asked if I received her phone message.  I had not.

Dr. Principal checked with Ms. Librarian who said Hunger Games was not shelved in the elementary school. She explained that the district does not ban books. It is available in the Middle School, but students must have parent approval before borrowing it.

I expressed surprise that Laura was the only student reading HG. Given the Lexile Rating, surely there were older children reading it in the school.  Dr. Principal shifted weight from one foot to the other, pausing, then said the librarians shelve what is appropriate for the school and grade level.  I volunteered in the library and there were multiple copies of Harry Potter which has a higher rating (880L), so it wasn’t done by Lexile; someone decided it was inappropriate for elementary school.

I asked Dr. Principal about Independent Reading time, how until now, Laura chose her own books, read what she wanted. She had an answer for that too.  Independent Reading time was for books from the school, student choice of course. Dr. Principal said she didn’t have a problem with Laura reading HG, but not in class.  Her concern for other students came up, as well as age appropriate material in the classroom.   I asked just when Laura could read HG and the principal said she could do so at recess or on the bus.

I explained to my daughter that she was allowed to read HG at school, but there were restrictions.

So Laura sat on the blacktop at recess and read.  And she read on the bus.  And she finished the trilogy.

Words are powerful.  But actions often speak louder than words. The principal said the district doesn’t ban books, yet the librarians shelve ‘age appropriate’ books; I call it selective shelving.

And here is the ALA press release of the Top Ten Banned Books.  Drumroll please.