This worksheet makes my stomach churn.  It entirely misses the point of this often referenced, much misunderstood passage. In it, Tom Sawyer must white wash the fence but instead, convinced his peers to do it for him and pay him to do so.  The importance is not in the “manipulation” but in the understanding of the meaning of work versus play.  Tom lies and deceives his friends, but look, he’s a scoundrel.  He’s a likeable and very funny scoundrel and the scene is one of literature’s notable passages. 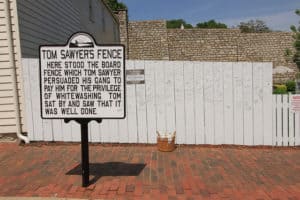 How about teaching that the attitude you take towards “work” makes all the difference? That indeed, if you enjoy your task, it’s a pleasure and people may even pay to do it.  Then discuss the merits of Tom’s conclusion and Twain’s genius. Does the reader think that such behavior will always work out so neatly and nicely? Instead of examining literary elements and the author’s intent, the worksheet is an exercise in amateur psychology.

These questions are not far from the logic used by a high school teacher to take the Nazi position that Jews are evil (link to article)   and empathize with why they acted as they did, or to take the position of any culprit, criminal, and antagonist in literature.  To study vice is meaningful and there’s a lesson for the reader, but study NOT empathy needs to come from understanding the character’s flaws, bad choices, risks.  Is the vice what we hope to teach children?  the behavior we wish them to emulate?  to deceive and lie?  to be scoundrels?

Somewhere in the middle of the last century, educators divorced the curriculum from goodness, virtue, and the association of knowledge with excellence.  This worksheet is a foul and perverse result of the absolute vacuum of moral study today.  Toleration AND empathy of every viewpoint, often the victim and the antagonist, inevitably leads to this wasteland of thought.

Will your child learn what he needs to from this worksheet?  You can read the complete chapter from Tom Sawyer here, chapter link.

Twain concludes the value of the anecdote himself and Tom learns something important at the end of his charade.

Tom said to himself that it was not such a hollow world, after all. He had discovered a great law of  human action, without knowing it–namely, that in order to make a man or a boy covet a thing, it is only necessary to make the thing difficult to attain. If he had been a great and wise philosopher, like the writer of this book, he would now have comprehended that Work consists of whatever a body is OBLIGED to do, and that Play consists of whatever a body is not obliged to do. And this would help him to understand why constructing artificial flowers  or performing on a tread-mill is work, while rolling ten-pins or  climbing Mont Blanc is only amusement. There are wealthy gentlemen in England who drive four-horse passenger-coaches twenty or thirty miles on a daily line, in the summer, because the privilege costs them considerable money; but if they were offered wages for the service, that would turn it into work and then they would resign.  The boy mused awhile over the substantial change which had taken place in his worldly circumstances, and then wended toward headquarters to report.  (Tom Sawyer, Twain)

Here is an excerpt about the assignment the teacher gave to high school students.

“You must argue that Jews are evil, and use solid rationale from government propaganda to convince me of your loyalty to the Third Reich!” the assignment, posted on the Times Union website, reads.

The Albany newspaper reports that one-third of students boycotted the assignment, prompting Albany Superintendent Marguerite Vanden Wyngaard to apologize to families, adding, “I don’t believe there was malice or intent to cause any insensitivities to our families of Jewish faith.”

The superintendent blamed tougher Common Core standards that require “sophisticated” writing linking English composition to other subjects, like world history. But not all are buying it.”  (Huffington Post Link)

The superintendent’s comment exposes the problem in the educational establishment today, that somehow only Jewish families might find this insensitive!